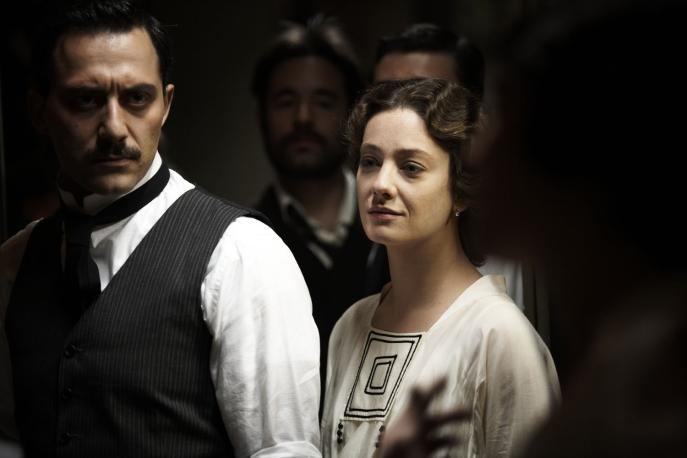 
As historical biography, Vincere tells the story of Italy’s fascist leader Benito Mussolini and his early lover and wife Ida Dalser. The film favours impressionistic detail over in depth characterisation. Operatic in style, with lush orchestration dominating the first half as Dalser and Mussolini become lovers, it eventually settles into an extended drama on Dalser’s attempts to have her marriage to Il Duce recognised. That she and her son are both locked away in asylums is a telling comment on the nature of Mussolini’s Italy and the poetic visions of Mussolini’s rise capture the intense passions that swept the country into this dark and brutal period.

The first hour, which tells of Mussolini’s move from socialist to patriot, from atheist to respected ally of the Vatican, rushes by in a blur of iconic episodes. Futurists and pacifists, soldiers and royalty all tumble into Mussolini’s spell: his rotating roll-call of lovers and friends reveal both his charisma and dishonesty. While he is never an unambiguous hero, his attractiveness is clear, and Dalser’s passion for this great man in embryo is understandable. His betrayal of her, dictated by his new political power and a streak of unkindness that is clearly evident from the first tryst, then defines the second hour, as Dalser is excluded and punished for her insistence on her son’s paternity.

Vincere superbly captures the tumult of early twentieth century Europe, and demonstrates clearly the factors that created fascism: the competing strands of nationalism, socialism and futurism are woven by a dynamic individual into the political creed that would threaten all Europe, and if the second hour drags, it is only in contrast to the explosive first. Italian fascism is identified as passionate and melodramatic. Vincere understands why it would appear attractive, without condoning it in any way. Through Dalser’s infatuation, a potent metaphor for Italy’s romance with the dictator is presented: her descent into the madhouse is a fitting coda.

From the first scene, when Mussolini challenges God to strike him dead, ‘if God exists’, his relationship with the Church represents Il Duce’s ascent to power. His alliance with the Vatican is, for Dalser, the ultimate betrayal, since it denies their marriage and Mussolini’s militant atheism. A stunning central scene has the wounded Mussolini lying in a beautiful church, tended by nurses and watching a film of the crucifixion on a billowing canvas. He rejects Dalser from his sick bed, even as his megalomania encourages him to identify with the suffering Christ. In this moment, director Marco Bellocchio uses religious iconography to expose Mussolini’s moral hypocrisy – the suffering Jesus is a sharp contrast to later images of the strutting dictator, but also expresses why Mussolini’s support for the Vatican was not merely political expedience.

The ravages of fascism are revealed only on a small scale, through the procession of the insane and excluded that dominates the second half. The easy symbolism of the sane locked away, while the mad run the state, is explored in detail, but Dalser’s love for her man never fades. This is immersive cinema, a robust and dramatic study of where the personal becomes the political.

Bellochio does not shy from using expressionist techniques, from flashback to montage to stock footage, skillfully interwoven into the narrative. It may lack the high octane drama of battle and blood, but it intelligently evokes the strong emotions that led to catastrophe.

I’ve Loved You So Long

Falling Off The Edge: globalization, world peace and other lies

The Best is Yet to Come