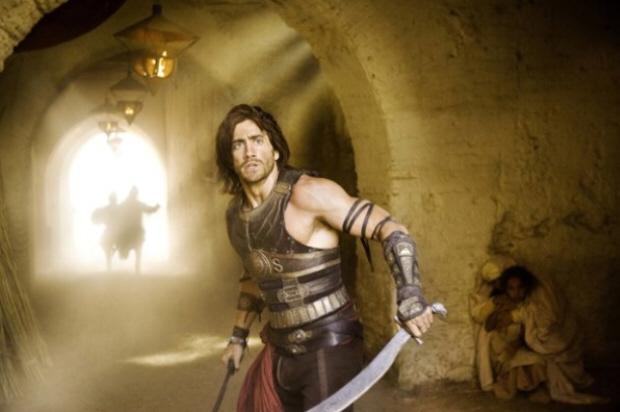 
Prince of Persia: The Sands of Time, is a foundling’s journey to true belonging in Disney blockbuster packaging. It is based on a popular computer game of the same name where the player rises to new levels in the game through jumping, climbing and solving puzzles. The first game (in what is now a trilogy) was released in 2003 and featured an exciting experience of advanced game play that was not based on body count alone. However there is no puzzle or challenge in this predictable, sandy, romp-quest. The enjoyment is in the smaller parts played by great character actors including Alfred Molina as an ostrich racing entrepreneur, Sheik Amar, and Ronald Pickup as King Sharaman.

The film casts Jake Gyllenhaal in the lead as Prince Dastan, the adopted son of King Sharaman. Dastan masterminds the raid of a holy city in the (supposed) quest for illegal weapons. His two older brothers, father and uncle make up the conquering Persian dynasty. Following the successful but bloody capture, the King reflects that he expected more of Dastan than his exceptional athletic powers and brutish strength and encourages him to develop the skill of diplomacy – that being the better path of a worthy ruler. This is Dastan’s ultimate mission and the purpose of his journey, although the denouement takes a while and involves the sands of time and a dagger that turns back time plus its feisty priestess Tamina (played by Gemma Arterton, recently in Quantum of Solace and The Boat that Rocked). The pair pass through a desert landscape on their quest to return the magical knife to its sanctuary. This part of the film is resonant of Monty Python and the Holy Grail meets Carry On Arabian Nights.

Released in time for half term, the young audience will be attracted to the film in the hope that it will be as entertaining as the game. Other films based on computer games such as Hit Man have not succeeded but this film has something for everyone, although I’m not qualified to judge if it will match the expectations of the fans of the game. Perhaps they will dust off the game in the light of the movie.

The device of the hero being a foundling gives hackneyed emotional interest although it isn’t developed much past Dastan having some empathy with slaves and greater insight and intelligence than his brothers (who have to be a bit dim for the plot to work). Also the knife that turns back time is used unimaginatively, with one reasonable exception involving suicide and trust. The characters are all shallow, swashbuckling fun and Jake has great biceps and is good with a rope – quite the Persian Tarzan at times. The bad men all wear lashings of fake tan and eyeliner and look like they are having great fun. The body count is high and the chases and fights predictable. Dastan and Tamina have to learn to trust each other to succeed in the mission, the special effects are spectacular but the actors have to make the best of a creaky script.

The human ending, after the apocalyptic special effects climax, sees Dastan briefly using his new powers of persuasion. And the baddie uncle (Ben Kingsley) gets his just deserts.

It is harsh to conclude that it was all a sandy waste of time, but nothing much happens that isn’t totally predictable. The games players may well be disappointed for their personal control, skill and interactive involvement must be central to the enjoyment of the game. The film serves up eye candy and action but little more.