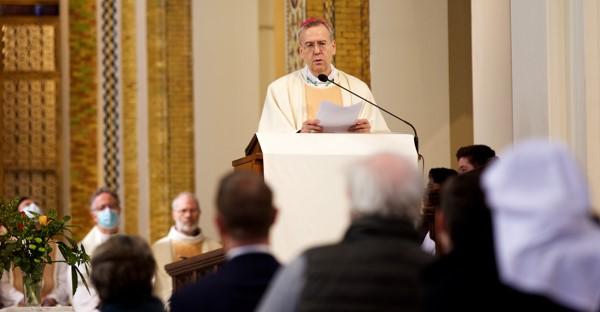 In his homily at a Mass to celebrate the fourth centenary of the canonisation of St Ignatius Loyola and St Francis Xavier, Bishop Nicholas Hudson reflected on the way in which the Jesuits, since their earliest days, have identified the needs of their time and worked with others to meet those needs. How has the work of God been achieved through the Society of Jesus and those with whom they partner in their mission?

Partners in mission. It’s an image which captures for me not only the relationship between seculars and the Society of Jesus but all that we celebrate today. Saints Ignatius Loyola, Francis Xavier, and Philip Neri; Blessed Rutilio Grande and Saint Óscar Romero, all partners in mission; and an inspiration to our own shared mission here in England and Wales.

That we had long been partners in mission was impressed upon me forcibly my first day in seminary. The Rector began the tour of the Venerable English College [in Rome] by showing us the very atlas over which Fathers Campion and Sherwin, Jesuit and diocesan that they were, would have pored on the eve of their departure for the mission. It was a journey which culminated just a few miles from [Stamford Hill], close by Farm Street, at Tyburn. There, as the two priests mounted the scaffold, Sherwin smoked his last pipe and, looking up into the white disc of a winter’s sun, was heard to say, ‘Ah, Mr Campion, tonight we shall be above yonder fellow!’ Having set out on mission together, together they would reach journey’s end.

The Rector continued the tour by introducing us to the Martyrs’ Picture, put there by the first Jesuit Rector, before which Campion and Sherwin would have prayed their last Mass in Rome. It is a powerful depiction of the Most Holy Trinity so beloved of Ignatius; beneath them, a view through the Flaminian Gate northwards to England; and, floating above the arch the College motto, ‘Ignem veni mittere in terram’: ‘I came to bring fire to the earth’. Ignem, IGN, the first example, we were always told, of Ignatian branding!

If the partnership between Jesuits and seculars was deep, it was not always easy. Both Frs [Norman] Tanner and [Michael] Holman looked distinctly uneasy when I said I’d like to take them to see the room in the English College in which the seculars had imprisoned the Jesuit General for a year. I am convinced Michael kept his foot in the door! Looking down from that place onto the church of San Girolamo, we recalled how Saint Philip Neri, also a partner in mission with Loyola and Xavier, would stand to encourage our predecessors as they set off in the morning for study at the Jesuit Collegio Romano, calling out to them, ‘Salvete Flores Martyrum’ – ‘Hail, you flowers of the martyrs’!

Six years at the Gregorian University deepened my affection for the Jesuits, a longstanding affection rooted already in eleven years’ education in Edge Hill, Wimbledon. That sense has been deepened through reading your Father-in-God, Fr Arturo Sosa. He quotes Blessed Pedro of Brazil, saying, ‘At the end of the journey they will ask me, “Have you lived? Have you loved?” And I, without saying a word, will open a heart filled with names.’ Among the names that will fall spontaneously from my heart at journey’s end will be many Jesuits as dear to you as they are to me, men like O’Collins, Rosato, O’Donnell, Gallagher, as well countless fathers of the British Province.

Those years in Rome were a marvellous introduction not only to Jesuit theology but to their spirituality and spirit. A retreat with Fr Gerry Hughes in my first month, in which he taught us how to meet the ‘God of surprises’ in prayer, was foundational. Getting to know Fr Campbell-Johnston in those first weeks, and spending time with Eritrean refugees finding their way to a fledgling JRS, housed then beneath the Gesù, was equally formative. Just as important was getting a feel for the spirituality of mission expressed in the church above, making friends with the relic of St Francis Xavier’s right arm; the image of Santa Maria della Strada; and the glorious crucifix, a welcome refuge after celebrating reconciliation with invariably compassionate Jesuit confessors.

‘Propitius ero tibi Romae’ – ‘I will be very close to you in Rome’ – emblazoned above the high altar of Sant’Ignazio, also spoke volumes to me because, like many people, I always felt the Lord close to me in Rome; and to know the Lord had promised the same to Ignatius as he entered the city at La Storta was a marvellous affirmation. But all that I met in Rome of and about the Society of Jesus spoke to me very forcibly of a mission beyond Rome: Francis Xavier’s baptism of tens of, even hundreds of thousands far, far away, in Goa, Ceylon, the Moluccas, and Japan; the call of Santa Maria della Strada to go out of ourselves and to be alongside the poorest, most marginalised of society. Getting to know the inside of the Greg, the Gesù, the Bellarmino, I was touched by the provisionality of these Jesuit dwellings, that you were there not to stay but to prepare; to prepare yourselves and others for mission beyond Rome.

I am touched to learn that, in recent years, the Society of Jesus across the world has sought to deepen still more its commitment to the poor; to learn of the second Universal Preference which was confirmed by Pope Francis three years ago, ‘to walk with the excluded’. Echoing this, I find Fr Sosa particularly eloquent in the way he describes this Ignatian Year in terms of seeking ever greater closeness with the poor and with Christ. The poor, he suggests, ask of the Society of Jesus really just one thing: tenderness; that is to say, tender fraternal relationship. Meaning? A Church that looks them in the eye, he says, and makes them feel at home.

Romero was not a Jesuit; but he too looked the poor in the eye. As Fr Sosa says, Romero ‘was murdered for having encountered the poor.’ And, of course, it was Rutilio’s surrender of his life for the poor which sparked the conversion in Romero. I like Fr Cardenal’s account of Pope Francis asking the postulator of Rutilio’s cause if they had a miracle yet. ‘Not yet,’ the postulator replied; to which Pope Francis retorted, ‘Yes you have: Óscar Romero!’ Archbishop Rivera y Damas, Óscar’s successor, affirmed this when he said, ‘One martyr gave his life to another martyr.’

Fr David Birchall observes that what Ignatius and Xavier’s sixteenth-century Europe and the twentieth-century Latin America of Romero and Grande had in common was that they were both experiencing a similar rejection of Christianity. In both contexts, the hierarchy could have been accused of siding with those in power who oppress the poor rather than being on the side of the poor. In El Salvador, it was Rutilio who led the charge to break that mould. He saw the crucified Christ in the people he served and the purpose of the Church as denouncing the evil imposed on them by the powerful. Rutilio’s witness transformed Romero, Romero saying at Rutilio’s funeral, ‘the Church must enter into the fray on behalf of the marginalised and the poor.’

That one sentence of Romero would seem to capture the fullness of the whole mission to which I hear the Society of Jesus dedicating itself anew in this Ignatian Year, that ‘the Church must enter into the fray on behalf of the marginalised and the poor’. Being sent is what I recognise as capturing what has always been your raison d’être, going in obedience to the word of the Lord as we hear it spoken through the prophet Jeremiah [3:4-9] today: ‘Go now to those to whom I send you’; and on the lips of Jesus himself: ‘Go out to the whole world’ [Mark 16:15-20]; urged on by the voice of Paul telling the Romans [10:8-15], ‘(people) will not believe in him unless they have heard of him, and they will not hear of him unless they get a preacher’. Fr Sosa likens Ignatius’s preparation of the first companions to Jesus’s own preparation of the disciples, in the way he had them spend time with him before he sent them out.

Ignatius and Francis Xavier teach all of us the need for both patience and the docility to respond at a moment’s notice: Ignatius’s patience in waiting on the Lord first in Siena then long years in Rome; and the spontaneity of Francis Xavier’s ‘Good enough! I am ready’, in spite of his unsuitedness, we know, to both sea-travel and the learning of new languages. Francis Xavier’s dying words, ‘Father, into your hands I commend my spirit’, off the coast of faraway China, capture both qualities exquisitely: patience and docility.

As Francis Xavier surely trusted in Ignatius’s prayerful accompaniment in mission so must every member of the Society of Jesus. I do not often ask the prayer of your two holy founders. But I have for decades asked, every morning, after praying the Morning Offering first taught to me by Fr Egan in my first year at Donhead, the intercession of the men with whom I began this reflection: Campion, Sherwin and Neri. More recently, I have found myself asking daily the prayers of Romero and Grande too. I think I should now call on Loyola and Xavier as well.

The mission we have inherited from these seven priests seems more urgent than ever. And I derive enormous encouragement from their example and accompaniment of us in prayer. The loudest encouragement I suppose I derive from Campion who, if he were to address us this day, would surely wish to assure us, more loudly than ever, of the eternal verity of his ‘Brag’. Speaking of our mission to the Church in England, Wales and beyond, he would surely repeat that: ‘If it is of God, it cannot be withstood.’ He speaks for every one of these our holy forebears and partners in mission: ‘If it is of God, it cannot be withstood.’ It surely is of God; and together we shall surely never allow it to be withstood!

Rt Rev Nicholas Hudson is Auxiliary Bishop for the Diocese of Westminster.

This text was delivered at a Mass on 12 March 2022 at St Ignatius, Stamford Hill, to celebrate the 400th anniversary of the canonisation of Ignatius Loyola and Francis Xavier.