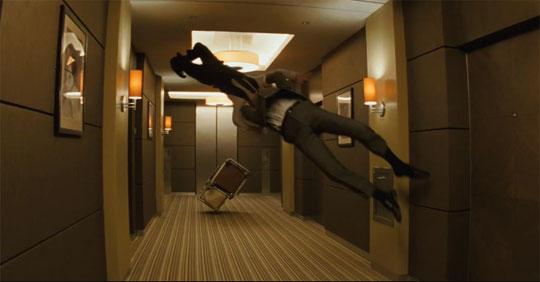 
It’s hard to know what to say about Inception without a) underselling it; b) giving away too much of the plot; or c) confusing you. So, three caveats before I begin: firstly, let me reassure you that there won’t be any spoilers here. The word count wouldn’t allow anything like an accurate summary of the story, for one thing, and there are still a few minor plot points that I have my reservations/questions/general musings about. But even if you did know everything that happened, this film would probably still be worth seeing (although I’d recommend the ignorance approach). Which brings me to my second point: go and see this film. Believe the hype. Buy the t-shirt if you must. This is an epic to which justice will not be done by the next few hundred words. And this, in turn, leads me nicely to my ‘thirdly’: I’m nit-picking in this review to quite a large extent. Of course the film is not perfect, but none of what I say below, or of what any other critics might want to throw at it, should be taken as a reason not to see this film. Just be prepared to concentrate. Do not under any circumstances go to the toilet or the popcorn counter. And try not to blink if you can avoid it.

I’ll give my best attempt at a summary, only so that what I venture by way of comment isn’t too abstract. Dom Cobb (Leonardo Di Caprio) is what is known as an Extractor. He and his team are hired by clients to retrieve information by invading the world of a target’s dreams, worlds which the team themselves create and manipulate, and stealing the information from their subconscious. But their latest client, Saito (Ken Watanbe), the head of an international energy corporation, wants them not to discover secrets, but to plant an idea, and this is called inception. Risky – how do you make someone think something without them knowing that you’re making them think it?

Well, in case you’re curious (but please don’t try this at home), you have to enter into a dream with that person, and then into a dream within that dream...and then into another dream within that second dream. The task itself is further complicated by the fact that certain people have trained their subconscious to defend against extraction; and that, to carry out inception and take the subject deep enough into their subconscious to successfully plant an idea without being detected, one of the first rules of dreaming has to be forfeited. Dying in a dream should wake the dreamer, but under the heavy sedation that the team (all of whom have to enter the dream in order to play their roles in the inception) must employ, if anyone dies in the dream they do not travel ‘up’ the dream levels to wakefulness, but rather down into limbo – where they could be lost. And time multiplies between each level of the dream, so that a few seconds of a dream equate to minutes, hours, even decades at deeper levels.

And of course, the leading man has to face his demons. Cobb’s motivation for taking on the job is Saito’s promise that he will help him return home to his children – he’s not allowed back into the USA because of charges against him, which are tied up with his deceased wife, Mal (Marion Cotillard), memories of whom plague his subconscious and jeopardise any dream he features in. In so far as there can be considered to be an antagonist, she is it – in the sense that she represents the biggest opposition to the completion of the task; not in the sense that she is the evil to his good (or vice versa), because that’s not something we’re invited to think about here.

In his last project, The Dark Knight, director Christopher Nolan left a very firm, if slightly blurry, moral fingerprint on Gotham City. Issues of corruption and terror, truth and sacrifice all had their allocated screen time; even Heath Ledger’s Joker seemed to have some kind of direction and justification to his scheming rather than the chaotic and senseless evil that we might have expected from the character. But Nolan has all but removed the moral framework from Inception – not to the point where we could ascribe to the film an ethical nihilism, but it seems to exist at least in some kind of moral vacuum.

When Cobb and the team are asked to undertake the inception, their reservations are quite pragmatic: it’s too difficult; Saito might not be trustworthy; it could be dangerous... nobody seems to be particularly concerned about whether or not it’s something they should be doing. We’re told that it’s not legal, and perhaps it would be asking a bit too much of a team of dream-stealers to get into a lengthy discussion about the morality of planting an idea in somebody’s mind when they’re used to stealing them. And granted, such a scene might not have been quite in keeping with the pace of the rest of the film. But do none of them have any qualms about what they are about to do? Well, Cobb does: he’s done it before – unbeknownst to most of the team – and it went wrong; but his guard is up against the fear of failure again, rather than the inherent integrity or otherwise of what he’s about to do. And what about the idea that they are supposed to be planting? Saito wants the son of his terminally ill rival, Fischer, to break up his company when he inherits it following his father’s death – the seed of doubt in the value of maintaining the Fischer stronghold on the market is what the team must plant in Fischer Jr’s (Cillian Murphy) mind. Global energy supplies are not too far from the collective conscience or interest at the moment, so it is marginally surprising that the dynamics and ethics of competition between multinational conglomerates are not even touched upon, aside from in the explanations of the task at hand. And then of course there is the difficult father-son relationship that the team must exploit to succeed – more potential for a value-based discussion, nothing of which materialises.

But can this really be considered a failing in the context of this film? It’s hardly verging on the immoral, and the very utilitarian approach to what moral questioning there might be certainly serves to keep the momentum of the film going. And of course, we can think about these things for ourselves during/after the film if we so choose; we hardly need Leonardo Di Caprio to highlight the ‘points for further reflection’, especially not when a fair amount of the dialogue is necessarily devoted to explaining what exactly is going on. The intricacies of the plot and the visual wizardry, are more than enough to occupy anybody’s headspace for the 2 and half hours of the film. The trailer gives a sneak peak at most of the special effects, but special they are. A zero-gravity scene in particular is spectacularly dizzying. Apparently, Joseph Gordon-Levitt’s preparation for the film involved weeks of practising movement and fight scenes in a corridor that rotates a full 360° – no shortcuts here. The cast more than live up to what is demanded of them by the script – Levitt in particular as Arthur, who impresses, informs and amuses in his roles as right hand man to Cobb, mentor to the Architect, Ariadne (Ellen Page) and verbal sparring partner for the Forger, Eames (Tom Hardy), respectively.

‘How exciting is it to go into a cinema now, not knowing all the plot points, not knowing who’s related to who, all these things? Because everything has to be immediate now, people demand knowledge.’ So said Cillian Murphy about the film and the blanket silence imposed on the cast by Nolan when it came to revealing any details. It is hugely exciting, but the experience of this film does not come for free – your patience and concentration are required and will be rewarded, even if just with a distorted perception of what is real, or with something to think about for a week or so. You might need that long to make sense of it all.