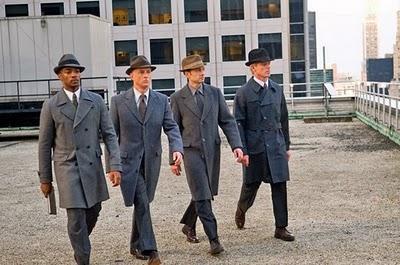 
It is very unusual to see a blockbuster thriller that combines a strong romantic theme, with a strong religious subtext and is equally acclaimed by Christian and Jewish audiences – The Adjustment Bureau manages to tick all these boxes. On widespread release during the post-Oscar hangover, it is an intriguing film that is well worth the price of a ticket. The director, George Nolfi, has acknowledged that the intention of this film is to raise questions, and they are questions worth considering. How do you marry belief in freewill with the omniscience and omnipotence of God? Because of this it is also one of those rare celluloid jewels that I would add to my list of films that could be used by teachers, catechists and lecturers as a resource for introducing groups to philosophical or theological issues.

Based on Philip K Dick’s short novel, Adjustment Team, Matt Damon plays a rising American politician, David Norris, whose career is about to go supernova. A seemingly chance encounter with contemporary dancer, Elise Sellas (played by Roehampton born Emily Blunt), is thrown into disarray by the mysterious forces at work beneath the surface of their world. As the plot unfolds it is clear that the budding romance is being thwarted by a legion of hat wearing ‘adjusters’ – whose job seems to be to make sure that the lives of David and Elise go according to ‘plan’ i.e separately. These adjusters (angels?) are answerable to the author of the plan and their boss the chairman (God?). They are not meant to be emotionally engaged with their subjects, but when one of the adjusters starts to go off-plan, it gets really interesting.

Philip K Dick, who passed away in 1982, was a science fiction guru and visionary, he has also been called the father of modern paranoid fiction. Its characteristics are clearly identifiable in The Adjustment Bureau, where the world appears on the surface to be definite and real, but upon closer inspection, is actually deceptive and deliberately misleading. At its most basic, paranoid fiction includes possible conspiracies by people in power, usually for malevolent reasons, although in The Adjustment Bureau a strong case can be made for the ultimate benevolence of ‘the plan’. I think the film can proudly takes its place in a distinguished line of Dick adaptations, alongside Blade Runner, Total Recall and Minority Report. In recognition of his influence, Dick’s second daughter, Isa Dick Hackett, is its executive producer.

There are good, if not spectacular performances by Damon and Blunt. Could this be a breakthrough moment for Emily Blunt? Time will tell, however, I’m sure appearing alongside A-lister Damon will have a significant effect on her career prospects. Her dance sequences are stunning in the film and showcase talents beyond her acting. The chemistry between her and Matt Damon is very important to the film, it prevents it from slipping into absurd, X-Files territory, and the focus on their believable and budding relationship allows the genre-swapping to proceed fairly smoothly. As we move from Matrix-esque sci-fi to intense romantic scenes, then back to dialogue with implicit theological discussion, Damon’s determination and disarming honesty somehow combines with Blunt’s funny anarchism keeping it all credible. This is no mean achievement by actors and director. However, both Damon and Blunt are overshadowed by our two lead ‘adjusters’. First of all we see Mad Men’s John Slattery pursuing them, road blocking them but also slowly leading Damon to the truth. However, most memorable is the restrained performance by Terence Stamp who plays a senior adjuster (archangel?) called in to clean up the mess. He delivers the memorable line, ‘We actually tried free will before and you gave us the Dark ages for five centuries.’

So go see it, if you have read this far into the review – then maybe it’s your destiny and you can’t resist it. If you know New York, see if you can spot the Jesuit-run Fordham University where many scenes are shot. The only drawback for me is that as the plot develops it seems as though the script writer reluctantly chooses the easy ending. The ending is disappointing – the implications brought out during the film deserved a better conclusion, a more daring one. It is only this that stops a very good film, being a great film. However, it will be 105 minutes well spent, and you will spend longer than that in the following days mulling over some of the issues.

In the Valley of Elah