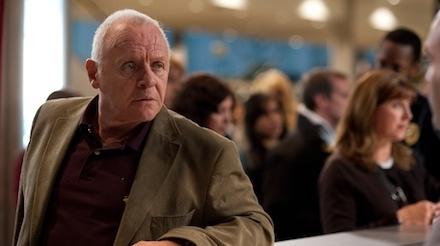 
How much do we think about the people around us? I don’t mean our friends and family but people on the street, on the bus, on the plane, complete strangers. How much do we really think about them? And even our acquaintances, our work colleagues. How well do we really know them? And yet each person has his or her own unique path in life, a complex life full of hopes and fears. And we do not live in isolation. Our lives impact upon those of the people who are closest to us, but we also constantly come into contact with a variety of people, and the decisions we make affect not only us but also those around us and even the people that they come into contact with because, in ways we may never know, our decisions can change other people’s lives and the decisions they make in a never-ending cascade of cause-and-effect. And sometimes the process may even come full circle and affect our lives in ways we never could have predicted.

360 begins with a photo shoot. A young woman has decided to join an online prostitution agency and dreams of clients in exotic places and of becoming rich. Her younger sister does not approve but quietly keeps her company on the journeys between their home in Bratislava and work in Vienna. From ‘Blanka’ and Anna we move through a progression of characters, all related to each other in a variety of relationships: spouses, lovers, colleagues, strangers who meet on a plane. They form a long chain of lives and relationships reaching across oceans and continents, eventually returning to reconnect with ‘Blanka’ and Anna, so that the chain unexpectedly forms the circle implied in the title.

The acting talent is all very good, including British actors Jude Law, Rachel Weisz and Anthony Hopkins. Due in part to the quality of the acting and in part to the superior script the most impressive aspect of the film is: that despite having upwards of a dozen major characters, each one feels real and worthy of our attention. It requires no effort to keep track of all the characters and their stories, and although the narrative travels through the different lives in fairly rapid succession, it rarely feels choppy or disjointed. In a way it is like a conversation which travels far from its original subject, fluidly moving between topics which are connected to one another even if, as a whole, they follow no overarching theme. There is no cohesive story, no single narrative to follow. The film is made up of a series of stories, all running concurrently, though we don’t follow each story through the entirety of the film. Perhaps the point of the film’s rather weak ending is to remind us that people’s complex lives continue even when we are not watching.

The theme of interconnecting lives is sensitively handled. With such a theme, there is much potential for sentimentality or overemphasis, but the lives of the characters are so ordinary, so identifiable that there is almost a feeling that we are watching real, ordinary people. The tone of the film is kept fairly light. Although there are moments of tension and emotion, there is plenty of opportunity to laugh at the actions of the characters, and by proxy at ourselves.

360 is a warm, funny, thought-provoking and thoroughly enjoyable film.