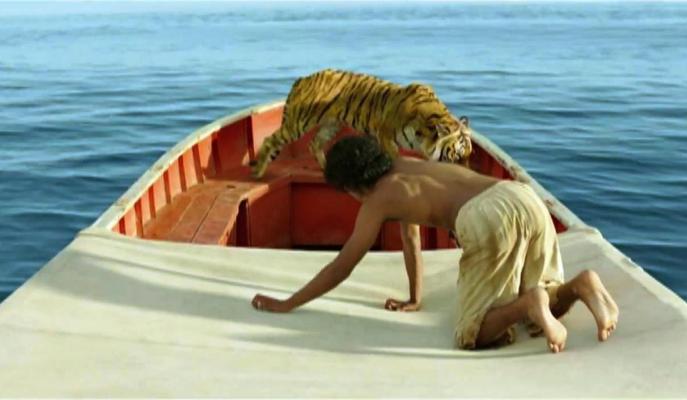 
Yann Martel’s Life of Pi is a magical lesson in storytelling. In his popular novel, Martel touches on spirituality, religion and human approaches to understanding God and the world around us, all with a certain warmth, humour and humanity. Ang Lee’s take on the novel is ambitious and visually spectacular in so many ways, but fortunately it does not, unlike many other CGI (computer-generated imagery) heavyweights, lose the comedy and charm of Martel’s writing.

The first part of the film takes us to Pondicherry in India where we are introduced to a young Piscine Patel (Ayush Tandon), who later rebrands himself ‘Pi’ at school for reasons you can probably guess. Pi lives on the grounds of the zoo owned by his family. We see him as a young boy attempting to understand the world and his own spirituality. Pi recognises life’s complexities and he does not marry himself to just one religion, but to three instead. He is a practising Hindu, Catholic and Muslim, much to the dismay of his atheist father who aligns himself firmly with science and rationality – the ‘new India.’ This difference between the curious Pi and his father is encapsulated perfectly in a single instance. Pi wants to meet face-to-face with the zoo’s new Bengal tiger, Richard Parker. Pi’s father upsets his son’s romantic notion of animals being creatures with souls by showing Pi the tiger’s ‘true’ nature as a carnivorous aggressor. He watches on as Richard Parker devours a goat and drags its carcass around his cage.

We are told all of this by the adult Pi, who lives in Montreal. He meets with a novelist keen to hear Pi’s story, having been told by Pi’s uncle that his nephew has ‘a story that will make [him] believe in God.’

During Pi’s teenage years, his life starts to turn upside down. He falls in love and, shortly after, his family tells him they are moving to Canada due to a dispute with the Indian government. Pi’s family, along with the animals they own, leaves India to sail across the Pacific to start their new lives. Halfway through their journey, nature again reveals its magnificent but unforgiving power in a vicious storm that causes the boat to sink. Pi (now played by Suraj Sharma) finds himself cut off from the ship and his family.

But Pi is not alone. The night after the storm we find him washed up on a small lifeboat with a hyena, a zebra, a chimpanzee and Richard Parker the tiger. Just as natural order might suggest, this nautical menagerie does not last for long and eventually just Pi and Richard Parker are left to drift across the Pacific together, trying to stay alive. It is here where Ang Lee whips out his box of tricks. But unlike, say, The Hobbit, the CGI effects are not just an end in themselves but rather they allow Lee to show the strangeness of the situation in which Pi finds himself with Richard Parker. There is a great deal of humour to be found in the scenes where Pi is struggling to assert his dominance and set territorial boundaries with what appears to be a real Bengal tiger. As the mismatched Pi and Parker sail aimlessly across the vast ocean, the film starts to take on a magical quality. We see all the things Pi saw – the flying fish, the jellyfish light show at night. This otherworldly aspect of the film is most extraordinary when they visit the strange Pacific island that lights up at night and is inhabited solely by meerkats. Lee is not just giving us a lightshow but an insight into Pi’s psyche and the dreamlike world he is immersed in.

In parts I was unable to tell the difference between what was CGI and what was not. Then I thought of the logistics of filming a real tiger in a boat with a boy, a hyena and a zebra and I put that notion to bed. But interestingly enough the film, just like the novel, does toy with notions of truth and reality. Lee makes the tiger look so real that we think it is just that; in the same way, Martel plays with our notions of what makes a story ‘real’ and ‘true.’ Ang Lee uses CGI to help us make sense of Martel’s story, just as Pi uses his story to help him make sense of what ‘really’ happened to him.

The Bard and the Archbishop