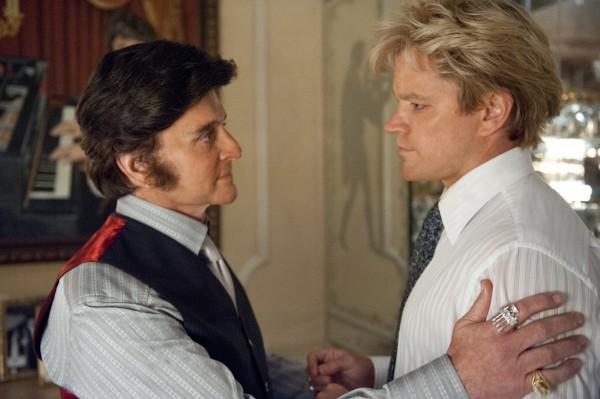 
The plot is relatively straightforward: after a backstage introduction, eighteen-year-old animal wrangler Scott Thorson catches Liberace’s eye and becomes his lover, apparently inadvertently pushing out the current favourites. Liberace showers him with gifts and proposes to adopt him; a combination of drug use on one side and promiscuity on the other leads to the breakdown of the relationship. Litigation and its grim aftermath follow, then reconciliation shortly before Liberace’s death from AIDS-related illnesses in 1987.

For this review, I had been struggling to find what one might call ‘a way in’, particularly for the readers of Thinking Faith. I could have drawn on Liberace’s Catholicism, or his near-death vision of the Blessed Virgin Mary, but these only really get a passing reference in the film, so I will begin instead with what might seem a bizarre comparison between this film and the 1996 version of Emma (the one with Gwyneth Paltrow in the title rôle). Only really serious cineastes read the credits, so here’s your chance to up your game: Emma, a full-length costume drama set in the early nineteenth century, lists 18 in the art-department (the set-dressers and the like); Behind the Candelabra, set in that far-off world of the late 1970s and mid-’80s, boasts an art department of over 70 (one of whom is, I suspect, very proud of his or her work on eBay sourcing the extraordinary collection of ornamental pianos – china, glass and diamante – that litter the set and form the back-drop to the closing titles).

This enormous team of set-dressers and designers contribute one of the joys of this film: an immersion into a very particular corner of 1970s design, a decade that is still a source of glamour and panache. The attention to detail and sheer quantity of stuff means that sitting through the film is a bit like being in one of Mr Liberace’s shows, with all the glitz, the flamboyant camp, the showmanship – if you go to see the film, remember that a large part of what you will pay for is this re-presentation of Liberace’s fantasy. The camera loves it all, with shot after shot panning from one room to another in one of Liberace’s houses: a strange, real-imaginary world of mirrored rooms, rhinestones and ‘neo-post-Louis Quatorze’ that only America, or maybe Saddam Hussein’s Iraq, could produce.

Liberace’s fantasies do not end at the diamante-encrusted pianos. At one point in the script he tells his boy lover that he wants to be everything to him – his family, his father, his brother and his lover. This is around the time that Liberace pays for cosmetic surgery to make Scott look like a younger version of himself. The script plays it for laughs, but I am left finding that single detail of narcissism and power the most disturbing element of the whole story.

The comedy is thus driven by the high camp, the showmanship, by the satire on bizarre Hollywood characters such as Rob Lowe’s plasticised plastic surgeon, Jack Startz, and by a determination only to gesture vaguely towards the serious, darker issues that might lie beneath the simple facts of the story. In consequence, putting the camp set and costume to one side, this is one of the straightest pieces of cinema I have seen in ages. This may prove the only review of Behind the Candelabra to describe the film as ‘straight’, but other reviewers have noted that if it has the feel of a TVM (a made-for-television film), it will be because it is a TVM, the studios having rejected the script for being ‘too gay’. As a result, a lot of the dialogue is plot-driven and it contains one or two clunks (which might have been pauses for hilarity in certain audiences); and, apart from half-a-dozen moments of heightened cinematography, there is a lot of pretty conventional camera work. My favourite frames came in one of the early sequences, and are from a 70s-style wide-angle close-up on the matronly adoring fans, with a good performance from a couple of extras that captures the innocent love that so many in his audience had for Liberace.

Maybe this quality of soap opera or Bette Davis melodrama is thoroughly appropriate for the subject matter, but it does generate a question: soaps and ‘made-for-television’ films employ an uncritical retelling of events as part of their mode of story-telling. Behind the Candelabra shares this innocence, and assumes a naïveté of narration. This becomes an issue when we remember that the storyline is based on the memoir of one of the central participants, Scott Thorson. It is not in doubt that Thorson was Liberace’s ex-lover, but questions could be asked about other details of the plot. It is also needs to be acknowledged that Thorson is a recovering addict who has spent time in jail. He is, to borrow a phrase from literary criticism, an unreliable narrator. But you might not guess this just from watching Stephen Soderbergh’s film, nor from Matt Damon’s sympathetic portrayal of him.

Damon and Michael Douglas put in great performances, as does the rest of the (star-studded) cast, who all deserve sincere praise for their commitment to this project, which others in the industry were reportedly too scared to touch. However, whilst both leads put in commendably watchable performances, I am not quite sure how much they were really able to feel some of the emotions they perform. The consequence is that, as with so much in the rest of Liberace’s work and biography, it is a great show, but you’re left wondering if what you saw was exactly what you got.


Behind the Candelabra trailer