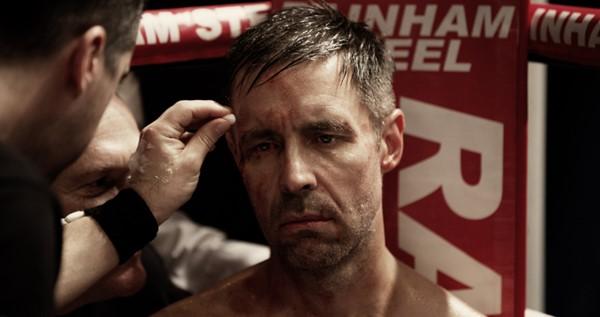 As prize sums and sponsorship deals in the world of sport getter bigger, so do the risks that sportsmen and women take for that moment of glory. Most brutally, this is on display in the world of professional boxing, which has been turbo-charged in recent years with an influx of TV money. The dwindling band of purists who protest that boxing is still a technical and athletic display are often undermined by the circus of money-grabbers that promote and stage fights.

The combative nature of the sport and the context in which the professional bouts take place make boxing a great canvas for all sorts of drama: tribal battles, explorations of male and (increasingly) female identity, and triumph over adversity. This drama seems to translate well to film and although American filmmakers dominate the genre, Journeyman is an interesting addition to the small collection of British films that focus on the ancient art of pugilism. However, it is not in the same category as the iconic Raging Bull or Rocky. This is because Journeyman suffers from an identity crisis: is it a study of contemporary boxing or a project to showcase the talents of its writer, director and lead actor, Paddy Considine? A film with great potential is held back by this confusion and the storytelling is often eclipsed by the show reel.

Considine plays a boxer called Matty Burton with one title belt to his name. He has the lot: a luxurious house, a loving wife, Emma (Jodie Whittaker), and a beautiful baby daughter on whom he dotes. There is one blot on the landscape of his success – some say that he won his title due to a dubious decision by an over-cautious referee. In the prideful world of boxing, this criticism stings and is motivation enough for him to defend his title one final time, on the verge of his retirement.

His younger challenger is brash and arrogant, and exploits the pre-fight publicity to engage in some trash talk. His taunts at first are like water off a duck’s back to the mature, self-contained champion, but the pressure builds such that the encounter becomes a grudge match. The fight goes the full distance, with Burton winning on points but sustaining a significant number of blows to the head. This results in his collapse when he returns home, and requires him to undergo brain surgery that reduces his cognitive function to that of a child. Sic transit gloria mundi.

Considine puts in a strong performance as the elite sportsman fighting to regain his life. With slurred speech, halting movements and a clouded memory, he holds the audience’s attention. Whittaker provides an excellent foil; Emma is no gold-digger or trophy wife, she shows her undiminished love and a willingness to understand and readjust. Here, with Matty and Emma negotiating a new life together, whilst the media circus moves on, the film is at its most absorbing. Emma is hoping beyond hope that the erstwhile champion will slowly recover and they can enjoy his lucrative retirement, but in the meantime she effectively has to care for two children. The audience feels the tension as Matty’s physical recovery comes with a change of personality and a terrifying new temper that he cannot understand. His random outbursts of violence and frustration and his unpredictable behaviour begin to threaten his daughter, which finally proves too much for Emma, and she leaves.

There are themes of love, fidelity and care that could have been explored in more depth here, but as Whittaker's character withdraws, the fascinating chemistry between two fine actors is lost. Considine is on his own now and the luxury flat becomes more like a private hospital ward, eerily empty and clinically white. The film suffers from the loss of the colour provided by the stoical wife, moving between a maternal care and a lover’s concern. Under the new, harsher light the words ‘vanity project’ come to mind. Considine has considerable acting skills and is totally committed to the role, but perhaps he pushes his talent a bit too far. His frustration with the film’s progress from its 2017 London Film Festival screening to general release six months later was such that he took to Instagram in January to announce that he was leaving the film world after realising that performing with his band is more fulfilling. ‘You’ve got to really love rock and roll to keep playing to an empty room. I’ve played to empty rooms and I didn’t give a f***. With cinema, it’s a little different. You make a film and it plays to empty cinemas and after a weekend it is dead. All of that hard work and nobody watches it. I don’t love cinema enough to just make films for the hell of it. I don’t love it enough to play to empty rooms. It is for that reason that I am done making films.’ His entry was soon deleted, which I hope signals that this is not the premature end of a promising cinematic career.

Back to the film: after a melodramatic climax, other characters start to come back into play. Burton’s support team, who abandoned him quicker than the apostles in Gethsemane, come back into the narrative to lift him out of his nadir. Reconciliation and redemption become the dominant themes. Even Matty’s defeated opponent becomes a companion on his road to recovery. There is something of the morality tale about this ending, and although it is pleasing, it is not as engrossing as when Whittaker shared the screen time.

I left the cinema feeling generally satisfied but slightly disappointed. If you are a boxing lover, you will enjoy this thoughtful film, with its nod to Michael Watson at the end. If you have reservations about the sport, those will only increase, but you will enjoy the performances. Maybe you will regret, as I did, Whittaker’s limited role, but perhaps this speaks to the need for the star of the show to have a wise voice in the corner of the ring, telling them when to adapt their tactics or throw in the towel.