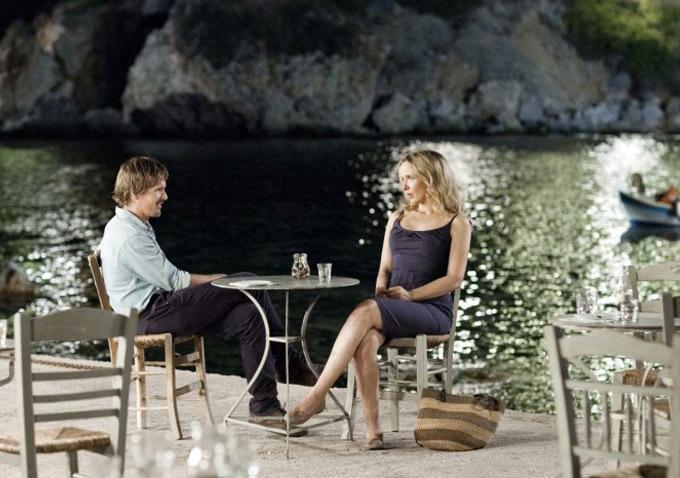 
Before Midnight is the long-awaited third instalment in a series of romantic cliff-hangers from director Richard Linklater. The so-called ‘Before’ trilogy (though there may be more in the pipeline) follows the intense relationship between American Jesse (Ethan Hawke) and Parisian Celine (Julie Delpy.) A regular nine year gap has separated each of the films, a break long enough to register changes in appearance as well as the maturing of the relationship. The first two films carried such an emotional weight that audiences will bring huge expectations to Before Midnight.

That weight lies in Linklater’s choice of themes for the series: the idealistic notion of the soulmate, the one person you are placed on earth to be with; and the powerful and visually real effects of the passage of time. Watching the series back-to-back (and it really is necessary to see the first two films before this one) is not unlike experiencing the unfolding revelations in Michael Apted’s Seven Up documentaries.

In 1995’s Before Sunrise, when our fresh-faced twentysomethings met as strangers on a train in Austria, it seemed that this chance meeting was somehow fated. Hopping off the train in Vienna, they had only a few hours together before Jesse’s plane left for the States in the morning. So they talked and talked – about art, music, books, philosophy – while stealing odd glances and gently probing to see if the other felt the same. Already in love after a single night together under the stars, they decided (without exchanging phone numbers, addresses or even surnames) to meet again in six months on the same platform in Vienna. What could possibly go wrong?

We found out in 2004’s Before Sunset. Jesse was now an up-and-coming novelist living in Chicago, married with a son, and Celine an environmental activist in Paris, the city being the last stop on Jesse’s European book promotion tour. We learnt that Jesse flew to Vienna in December 1995 but Celine failed to show – her grandmother’s funeral got in the way. Desperate to see her again, Jesse has written a novel based on the 1995 meeting, in the hope that Celine will read it and get in touch. She does, and after an emotional and lengthy verbal game of chess (like High Noon or Hitchcock’s Rope, the second film plays out in real time), the thirtysomethings are back in each other’s arms by sunset, seemingly oblivious of the consequences for Jesse’s marriage.

Jesse’s unspoken hurt and possible resentment over the December fiasco, together with the mind-game that Celine plays on him in Sunset and the high-octane nature of their romance generally, should have prepared audiences for Before Midnight. Because in 2013, reality arrives like a splash of cold water.

Fortysomething Jesse, long divorced, has set up home with Celine in Paris and the couple are now holidaying in Crete with their angelic 8-year-old twin daughters (like good French children, the girls are seen and not heard.) Also along is Hank, Jesse’s 14-year-old son from his first marriage, who has joined Dad for the summer. The film opens at the airport with Jesse seeing the boy off at the gates before the latter’s lonely journey back to Chicago. Hank (who intriguingly wears the same Converse trainers his father wore in the first film) tells Jesse not to visit this year because Mum still hates him (and indeed, looking at the saga from her point of view, who can blame her?). Driving back to their villa, Jesse remarks to Celine that Hank badly needs a baseball coach – he cannot catch a ball and throws like a girl. Celine cuts him off with, ‘Jesse, I am not going to live in Chicago.’

Since this is the first time in the trilogy that we have heard a cross word between the lovers, it comes as a minor shock. It is a portent for what is to come.

Their holiday villa in Crete was the real-life residence of Patrick Leigh Fermor, who died in 2011 at the age of 96. In the film it belongs to an elderly writer, also called Patrick (played by cinematographer Walter Lassally, who shot Zorba the Greek on Crete.) Two other Greek couples make up Patrick’s party at the villa, the forty-ish Stefanos and Ariadne, and the youngsters Achilleas and Anna (Jesse’s wandering eye admires Anna in her bikini.) While the women and girls prepare lunch, the men lounge outside in the sun, talking (it must be said) rather pretentiously about books.

Over an al fresco Mediterranean lunch in idyllic surroundings, the party discuss whether it is reasonable to expect modern couples to stay together forever. Young Achilleas and Anna are realists – they freely admit they will eventually break up – while an elderly woman friend of Patrick’s says tearfully that she misses her dead husband. Jesse makes light of the subject, but we sense that it is very much on his and Celine’s minds.

As Celine and Jesse stroll off to enjoy an afternoon’s wandering, Linklater repeats his shooting style from the first two films – very long takes with a moving camera as the couple exchange non-stop dialogue. For the first time, however, I felt this strategy no longer worked as it should. There was a rationale behind this in the first two films, when the clock was ticking and the couple did not want to waste a minute together, but now I found myself asking where are the normal silences between two people who have spent nine years together? Their non-stop ideological sparring seems unnatural and forced, and even slightly adolescent.

It is impossible to write about Midnight without revealing that the film builds to a climactic 30-minute argument between the lovers. For the first time in the trilogy the couple are stuck indoors together, in a hotel room that Ariadne and Stefanos have paid for as a romantic treat to give them a break from the kids. This room becomes increasingly claustrophobic as a tense battle of wills develops between a passive-aggressive Jesse and a shrill and neurotic Celine. She displays a real righteous anger at the role in life that gender has handed her, and belittles Jesse at every move. For his part, he seems most anxious to have sex with her, possibly because past experience has told him this is the only way they are going to make up again.

By this point, viewers who envied Jesse and Celine for their luck in finding each other in the first two films may consider themselves lucky they are not a part of this relationship (I nearly wrote ‘marriage’, but a scene in a Byzantine church earlier reveals this is not the case.)

Does this lengthy and wearying row – a 21st century update of Taylor and Burton in Who’s Afraid of Virginia Woolf? – completely extinguish the idealism of the first film? It is ironic that the very thing that brought Jesse and Celine together on the Austrian train back in 1995 was their shared scorn for a middle-aged couple in the carriage who were at each other’s throats. They would seem to have grown into that very couple. (If Linklater planned this ironic full-circle back in 1995, I am more than impressed.) There is hope, however – at least they are still talking – and at the end of the day Jesse is a good man: ‘If the question is, am I committed to you and the girls for the rest of our lives, the answer is a resounding yes.’

Taken as a whole, the ‘Before’ trilogy is a major cinematic achievement, taking us through an 18-year narrative arc that is at once a highly fictionalised genre convention and a story that is movingly real. Building on its predecessor, each film delves deeper into love, the loss of love, and the experience of simply being a human being. There has been much humour along the way, too. Let’s hope that Linklater, Hawke and Delpy regroup for a fourth instalment in 2022.