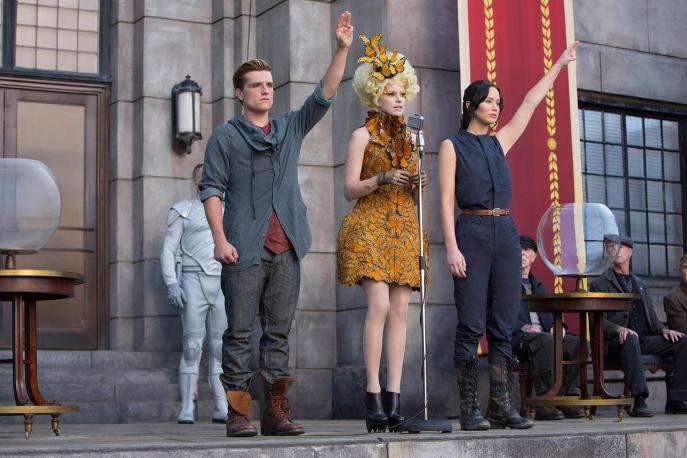 It has been a year, Katniss Everdeen is back, and revolution is in the air.  The scene opens on a brief respite in the woods outside District 12.  Katniss is hunting, and soon to depart on a ceremonial tour of Panem in the run-up to the Seventy-Fifth Annual Hunger Games.  Her sudden hallucinatory vision of a murdered teenager reminds us of gladiatorial horror, past and pending, and we know that the muscled embrace by her hunky friend Gale will not shield our heroine from what awaits her.

For in the districts, revolt foments.  And it does not take long for Katniss to realise that her defiance of the Gamemakers at the finale of the last games, with suicide on her lips and poisoned berries in her fist, has transfigured her into a living symbol of hope.

But thoughts run otherwise in the Capitol.  Diabolical in cunning, President Snow and his sadistic thought police have concocted a plan to squelch all rebellion.  Katniss and Peeta, the star-crossed lovers, inspirations of the people, will be thrown back into the arena.  This time with twenty-two other veterans of the games, every one an experienced and deadly victor.  The stakes are raised, and, correspondingly so, the captivation of the drama; relative to its predecessor, at least.

At this point, the most politic assessment of the film may be that lovers of the first movie will almost certainly find even more to love in the sequel.  But any candid viewing must confess that the most interesting thing about this film, like its predecessor, is the high quality of its superficiality.

Cinematographically, the film is flawless.  Epic wide-angle shots of cities, crowds and wilderness landscapes.  Smoothly integrated CGI.  Unsteady closeup handcams at intimate moments, expertly evoking the uncertainty which shakes the emotions of our protagonist.  Yet for all of this, the film as a whole seems to lack a certain something.

And the problem is not in the (necessarily) simplified adaptation of the story from original paperback form.  Far from it.  Casual readers of the book will be delighted to rediscover its key characters and cliff-hangers faithfully rendered.  There is even a striking sense in which the onscreen spectacle plays out like the events of the story videotaped.

But this is also the problem.  Obvious care was taken to translate the words to images, and scene by scene there is a manifest concern for even-handed accuracy.  However, like a nineteenth century literalist translation of a passion-driven Russian novel, the film comes across as adequate at the level of surface activity, yet admits only occasional flashes of the tumultuous genius below.

For example, we see a challenge accepted, a kiss stolen, a death delivered, yet only learn in a limited sense what it means.  There is scarcely a reflective moment to share the interior concerns of the characters; the episodes simply roll out, to adapt a phrase, like one darn thing after another. There are eye-popping events and table-turning decisions, but we as the audience are not helped very far along in determining why we are really supposed to care.

Which brings back the suggestion that for all of its surface sparkle, the film as a whole still lacks a certain something.  And it may be that the precise thing it lacks, paradoxically, is a whole.

Eight hundred years ago in Paris, St Thomas Aquinas observed that every living material thing is made up of more than one part.  Be it vegetable, beast or human being, what makes any of these compound creatures something single is an intuited principle of unity he called an anima.  It is word from which we derive ‘animal’ and ‘animate’, and its usual translation is ‘soul’.

When the credits roll for The Hunger Games: Catching Fire the most important thing about it might be a failure of soul.  While outwardly it can boast all the glamourous trappings of Hollywood, inwardly it still ends feeling empty.  The best hope for the series, then, may be its promised revolution:  a radical turn, wherein all the assembled pieces, heretofore not enough to make a life, at last add up to one.

Outside the City
A Little History of Poetry
Co-creators of a better world
Prayer and discernment in lockdown
Laudato si’ and Covid-19: Can praises still be sung in a strange land?