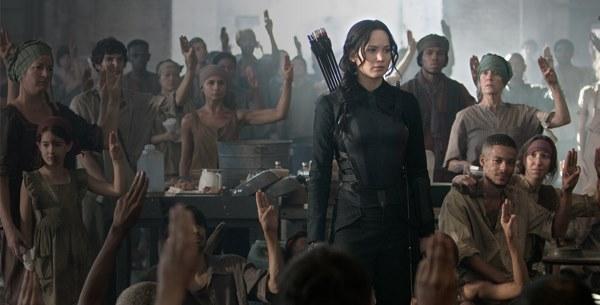 This is the third instalment in the immensely popular sequence of films, which is promised to conclude with a fourth film next year.  That's what happens with successful films these days, they become 'franchises': if studios think they can spin a story line out across four hours rather than two, and thus get us to pay again and see the same film in a slightly different guise in a year's time, then they will.  I wonder what the current set of movie executives would have done with Gone With the Wind (I suppose there would have been Blown in on the Wind, Blown About by the Wind and Blown Back by the Wind – and each six hours long).

There is, therefore, a slight quality of filling time about this particular instalment of The Hunger Games: it’s not quite the same as the earlier films.  It lacks the spectacle and surreal nightmare vision of the first film, and also some of the subtle qualities of the text.

Which is a shame, really, because the first film established some intriguing themes and triggered a rich series of debates and arguments.  The films are set in a dystopic American future (a state now named ‘Panem’) in which the federal system has degenerated into an exploitative relationship between the elite core 'Capitol', and servile fringe 'Areas', all identified only by number.  A gruesome twist in this constitution is that every year, the Capitol runs the Hunger Games – gladiatorial fights to the death between teenagers nominated by each of the subject areas.   It’s a terrifying and compelling vision which draws on the bitter truth of history:  watching the vision of Panem in the first film, I found myself reminded at times of the theatricality of Nazi Germany, the horrors of the holocaust, and the ‘selection’ process in particular.  It is a chastening vision about the struggle for survival that many have had to experience at the hands of state violence or exploitative capitalist relationships; it shows how power misused dehumanises the individual, shattering solidarity and negating human dignity.  And in a simple plot twist that brings post-modern possibility into play, it's all televised: the Hunger Games themselves are an extraordinary talent show such as The X Factor or Pop Idol, or some sort of reality television programme.

In this instalment, the element of virtual reality is still there, but now it has become a weapon, with short terrorist films made by rebel film makers fired across the web like viruses or bombs: it's a world in which the representation of a story in the right way and at the right time is more powerful and more effective than blowing up a power station.  It’s a world in which, to paraphrase the late Gil Scott Heron, the revolution will indeed be televised.

This is rich territory, and has succeeded in generating a range of interpretations.  As Peter Suderman commented in The Washington Times, The Hunger Games could be an allegory about inequality and the class divide, or a right-wing libertarian epic about the evils of authoritarian government; maybe it’s a feminist revision on the sci-fi action blockbuster… Others have seen parallels with the Christian themes of self-sacrifice and redemption; still more have debated the representations of race and ethnicity.  Everyone seems to be straight in this particular vision of the future, so at least sexuality is presented as uncomplicated – itself a suitable subject for debate, but maybe elsewhere.

I suspect that one of the things that contributes to the richness of this text, and the fascination so many have with this series of films, is that the roots of this sequence of stories spread far and are deep.  I saw references to the Star Trek episode 'A Taste of Armageddon'; the cosmic battles between abstract good and evil in Star Wars or Harry Potter; the Christian allegory of The Chronicles of Narnia; and the dystopias of The Handmaid’s Tale and Fahrenheit 451, to mention just a few.  What is engaged with here is ultimately archetypal material, of youth battling age, justice fighting power; of the real self emerging in a struggle against pastiche and the impositions of parental figures.

It’s all got a bit simpler in this stage of the story because the hero, Katniss Everdeen, is hiding out with the good guys of Area 13, plotting rebellion and making the odd incursion into enemy territory.  And that, dear reader, is about it.

The truth is that this particular instalment is very much the narrative filler before the massive, epoch-defining fight between good and evil which will clearly take up most of the final film.  I have to say that I was bored at times waiting for something to happen, but if you've been gripped by the ideas and themes of the previous two films, you'll want to see this no matter what I write.   And if you’ve not watched any of the other films in this sequence, you should –  they’re fascinating, probably because they tell us more about where we are now than where we might be in the future.