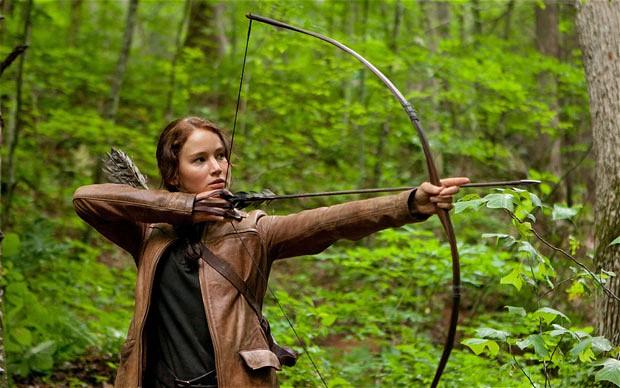 
Much has been made of the connection between Suzanne Collins’ trilogy of novels, of which The Hunger Games is the first to be adapted for the screen, and films such as Battle Royale. The comparison is an obvious one – both films present a dystopia where children are imprisoned in a televised game where they must kill each other to survive – but it goes no deeper than this. Despite the similarities in the set-ups, The Hunger Games has more in common with the great seam of films about adolescence from which some of the best of Hollywood’s popular, mainstream films have come. In its concern with young people determining themselves against a hostile environment it sits more coherently with The Breakfast Club than Battle Royale.

The publicity for the film focuses unsurprisingly on the hunger games themselves. The country of Panem (seemingly a vast northern American amalgamation) is separated into 12 impoverished Districts and a wealthy Capitol. History is sketched out through propaganda films and exposition: an uprising 75 years ago resulted in the tradition of the hunger games, in which 2 young people from each of the 12 regions are selected to compete against each other. Only one can win, by surviving the longest and killing off the others. The rules of the game are fundamentally the same as the rules in Battle Royale, but the latter comes from a very different culture: the Japanese concern in the mid-90s with a generation of young people seemingly disenfranchised from the mainstream. There the ultra-violence stems from the hatred that the teachers and students share for each other, and it is geared to shock. The Hunger Games averts it 12A eyes from the worst of the violence the children inflict on each other.

One of the few disappointments in the film is the haste with which the narrative hurries towards the start of the games: a generic design flaw for this type of hybrid film, perhaps. The most interesting parts of the story occur in between the arrival of the two protagonists from their home in District 12 to when they leave the Capitol for the games themselves. The relationships between Katniss and her sister and mother, her close friendship with the boy left behind at home, and with the nervous Peeta, are sketched out in scenes that feel hurried through. There was enough here of interest to make me want to read the book: Peeta is an interesting character, a nervous boy who discovers that he is able to handle the witticisms and ironies of the Capitol far more effectively than Katniss, to whom he turns to for physical protection. Faced with the pre-games interviews on national TV, he discovers a confidence in front of the camera that Katniss lacks: a nice shot of mirrored body language between him and the talkshow host suggests where his talents lie. Katniss’ preparations involved an intrusive beautification – her legs waxed, eyebrows plucked, make-up applied for the first time to her face. Their District is a failing mining district; the Capitol looks like Paris fashion week or 19th century Vienna. Both Katniss and Peeta feel like real teenagers (unlike, say, Dawson’s Creek’s hyper-articulate 16 year old therapists).

When the games begin our interest in how they cope with their ascension to national celebrities is replaced by the blood-and-thunder tension of a thriller. Within the games the children alternately protect, betray and slaughter each other. But behind the violence lies the American adolescent and high school experience that has provided the content for so many good quality Hollywood films. The metaphor of the hunger games for adolescence works surprisingly well. The children are caught in a world where adults are present through the rules that they have set, but with the responsibility to act on their own with adult consequences; the environment in which they are made to operate is a competitive one (its real world equivalent is the struggle for success in exams, popularity, employment, which impinge on the childhood world). Katniss’ sexualisation in the hands of her PR man and designer marks her out as adult territory. The melodrama of the metaphor – adolescence as a killing ground where you have to be harsh to survive – is justified by the experience of that period of life, when every challenge and choice can feel like “life or death”.

What makes The Hunger Games worth watching (and probably even more so, reading) is the way it foregrounds these challenges in the lives of Katniss and Peeta. At the centre of the games, and by intimation, the core to all of adolescence’s struggles, is their search for integrity. Katniss faces the choice of killing her friends in order to survive; then she must choose whether to play up to the demands of the crowds and adopt the role of star-crossed lover, an emotion that she does not feel. Peeta seems to betray Katniss, and then turns to her for protection, confessing love. In our day to day vocabulary, integrity often becomes a synonym for honesty, or for ‘having values’ – ‘she’s a person of integrity’ suggests trustworthiness, reliability. But integrity is a broader-leafed concept than this. A clue is in its other relations – from the same root come words like ‘integral’ and ‘integer’. We talk of a building’s structural integrity as meaning that it has solidity, a good design at its centre, integral to its wellbeing; integers are whole numbers. The Latin root means ‘untouched’ – something undamaged that retains its initial purity. In this company, integrity is not simply a narrow concept of decent behaviour, but a way of describing a healthy completeness, a harmony between word, act, deed and spirit, that for many of us resides most strongly in our memories of childhood simplicity. Adulthood involves compromise, diplomacy, politeness, and pragmatic deceptions; we adopt masks and ways of behaviour that enable us to move from one environment to another. With each different role the risk is that what is at the centre becomes ‘touched’, or muddied. Adolescence is often the time when we first begin to encounter these battles. We have phrases like ‘being real’, ‘being true to yourself’, or the opposite (in the words of that ur-adolescent, Holden Caulfield), being ‘a phony.’

This fight for integrity takes place in deceptively mundane circumstances – no totalitarian violence for most of us, thank God – but whether the backdrop is a school cafeteria, an office, or a family home, what is at stake is just as important and is at the heart of the Christian experience. The Hunger Games is not a perfect film but it succeeds by dramatising this universal search for a way of being whole and true.