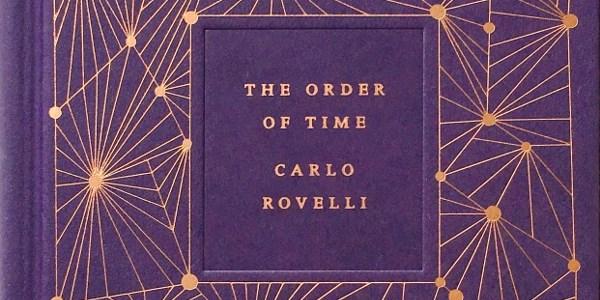 I remember sitting in a library reading Ludwig Wittgenstein’s Tractatus Logico-Philosophicus and being struck by his pointed phrase, ‘four o’clock on the sun’.  Much later, I struggled for a footing in the strange spatio-temporal world my uncle lived in when suffering from Alzheimer’s disease. ‘Time’ is indeed moving and mysterious – and wonderfully so for a theoretical physicist, Carlo Rovelli from the Centre physique théorique in Marseille. Rovelli has already written entrancingly on physics for physicists and non-physicists,[i] yet the present offering – a small purple and gold volume, innocent of dust jacket – has a quite particular and original scale.

There is no absolute time or universal present. ‘Clock time’ varies with speed and position. It slows in the vicinity of mass – we age more quickly in the hills than on the plains. In an immense universe, there is no ‘present’ – in a remote galaxy, nothing is present to us. Time is not directional, flowing from the past through the present into the future. The second law of thermodynamics gives a kind of directionality (heat always moves from hot to cold bodies) but at the most elemental level of the cosmos, time does not appear in the equations. It turns out that time is not an independent entity, but an aspect of a dynamic field. Not only has the present gone, but as far as time goes we have also lost unity, direction and independence. In Rovelli’s phrase, this is the ‘crumbling of time’. He quotes from ‘Walk in the Sunshine’, in which Grateful Dead sing about a watch: ‘The time it seems to capture is just the movement of its hands’.

Does this ‘crumbling’ leave us with grievous losses? Well, ‘Blessed are those who mourn, for they will be comforted’ (Matthew 5:4) – Jesus’s third beatitude has a wide application. Here the ‘comfort’ or consolation is about truth and reality. Our ordinary sense of time may have crumbled, but it is not as if nothing remains.

The ‘absence’ of time at an elementary level does not signify stasis. ‘Things’ do occur or, rather, there are events, processes. In our ordinary world, things persist, but events have a limited duration. It may make sense to ask where a thing will be tomorrow, but – as Rovelli says – what about a kiss? At the smallest level there are no primary substances, but relations between events – complex vibrations in a quantum field – where ‘grains’ (photons, particles, electrons, quanta of gravity, etc.) do not exist in space, they form space and make up webs, spin networks whose rings are called ‘loops’. (Loop quantum gravity is Rovelli and his companion’s current research.)

All of this is elegantly and delightfully expressed. The book is not exactly an easy read even if there is only one equation in the text.[ii] However, from a world without time our more usual world with its ordinary – and extraordinary – sense of time can and does ‘emerge’, an idea of emergence that is unified and original. Rovelli is (ironically!) clear that this emergence is the most difficult part of his book, and that strangely enough we ourselves have a role to play.

Things in our world are ‘blurred’ when seen close up – for example, clouds are clear high in the blue sky, but not close up. Similarly, we don’t see the play of molecules when looking at a still and clear glass of water. Close up, we might measure where they are and what speed they have. But position and velocity are not ‘commutative’ – it matters which you measure first, you can’t measure them simultaneously. Think of driving along the motorway: if your speed is 70 mph, where exactly are you now? But it’s not time and energy that give us what we experience: our usual, experienced world gives us time and energy – and, indeed gives us our perspective on the experienced world. There is a lot we simply do not register. Time emerges from our perspective. Rovelli is clear about the importance of objectivity – a common point of view – and also that in the ‘anxious pursuit of objectivity, science should not forget that our experience of the world comes from within.’ (p. 132, emphasis added)

So Rovelli moves into his other sense of time, which comes through the emergence of consciousness in a world of which we are part. This involves an amount of brain science, although the treatment is also nicely literary, including Proust and the Mahabharata. In this world, narrative matters. The treatment is also philosophical, taking in Heidegger and Descartes.  I enjoyed Rovelli’s sense (p. 153) that the first Cartesian step is not cogito ergo sum but dubito ergo cogito (‘I doubt – or wonder – and therefore I think’). Overall, the picture that emerges is that ‘objective’ and ‘subjective’, or ‘external’ and ‘internal’, time do sit well together – kissing cousins. Indeed, leaving aside what Rovelli considers ‘tiresome’ evangelical interjections, he delights in the famous Book XI of Saint Augustine’s Confessions, where time is measured within Augustine’s mind, and notes with amusement that a fourteenth century Bishop of Paris condemned this view (pp. 156ff). Of course all of this is difficult and fraught with wonderful questions, notably about the ‘emergence’ and ‘nature’ of consciousness. But Rovelli’s account is refreshingly coherent, inclusive, holistic and fresh. As he says, time is ‘the greatest mystery’.

Early on Rovelli declares: ‘Perhaps poetry is one of science’s deepest roots: the capacity to see beyond the invisible’ (p. 21). Since Horace’s Odes provide an epigraph to every chapter save one, and other poets – Shakespeare, Rilke – make appearances, poetry clearly does matter to Rovelli. For myself, it seems that at best a poem will ‘get somewhere’, but the somewhere is not so much a conclusion as a holding together of many things. And a poem may take the reader as well as the poet somewhere. After many lines of exuberance, the final line of George Herbert’s sonnet ‘Prayer (1)’ is ‘The land of spices; something understood.’ The last two words are indeed a fine landing place. But there is more to it. For Aristotle we are not so much ‘rational’ as ‘language’ animals.[iii] Poetry is not a sort of decorative or minor extra, but also part of what ‘emerges’ in and from Rovelli’s exploration of time – as well as victualling the expedition.

[i] Seven Brief Lessons on Physics (Penguin, 2014) and Reality is Not What It Seems. The Journey to Quantum Gravity (Allen Lane, 2016).

[ii] The elegant second law of thermodynamics . The footnotes are not as parsimonious as the text in providing equations.

[iii] The usual translation of Aristotle’s definition of a human being – Zwon echon logon – is ‘rational animal’.  But it is best to allow logos its full polysemy and render it as an ‘animal possessing language’. See Charles Taylor, The Language Animal: The Full Shape of the Human Linguistic Capacity (Harvard University Press, 2016), p. 338.

Too Brave To Dream: Encounters with Modern Art