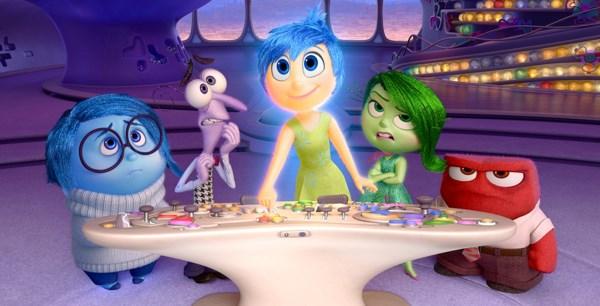 My friends and I were concerned that we might look a little out of place going to see Disney-Pixar’s latest offering as three thirty-something women without an appropriate child to accompany us. We needn’t have worried. Not only were we in the company of several other adult-only parties, but we found as much, if not more, to love about this film as many of our younger fellow viewers.

The premise of this film has been well documented elsewhere, but for those who don't know: Inside Out introduces us to the emotions that live inside the head of an eleven-year-old girl, Riley Anderson, and shows us the effects of the constant battle between those emotions to be in control of her personality. At the point at which most of the action takes place, Joy has been in charge for most of Riley’s infant years, meaning that her core memories all have that emotion’s characteristic yellow colour. But as a cross-country move beckons, Sadness is beginning to interfere, albeit inadvertently, with the tight ship that Joy has been running. From here on it, things become a lot more difficult for Riley, and for the emotions themselves. When Fear, Disgust and Anger are left to take the reins, as you can imagine, Riley’s parents’ “happy little girl” becomes a different person.

There are plenty of Ignatian ideas to take out of this film. The first is the privileging of the imagination. Not for nothing do the Ignatian exercises ask the exercitant to become attentive to their inner life and their relationship with God by starting with imaginative contemplation.  The imagination has a freeing vitality which can help us to become attuned to very real experiences which we might never recognise or to which we might never have access if we remain rigidly fixed by other constraints. So as to avoid spoilers, I won’t reveal here exactly how the power of Riley’s imagination affects the way the film plays out, but I will say that its triumph moved me to tears.

A second, related idea is tied up in the viewer’s experience of the film: what we see is the interplay between different emotional forces, constantly in a dynamic of pushing and pulling in myriad directions. Ignatius asks us to pay attention to exactly this dynamic within ourselves. In David L. Fleming’s translation of the Spiritual Exercises, the guidelines for the discernment of spirits are introduced with the claim that they ‘might be helpful in understanding different interior movements which happen in the “heart” of man and woman’, so that the exercitant might recognise those that are good and those that are bad (those that lead us to and away from God, respectively).

I don’t want to push the point too far: of course it is an over-simplification to reduce these movements to just the five categories of Joy, Sadness, Fear, Disgust and Anger. The film might also be vulnerable to the criticism that even these emotions are unhelpfully caricatured – Sadness certainly veers in the direction of depression, Anger never shows any signs of being righteous, and Disgust might just as well have been called ‘Arrogance’ – but this can be excused in the name of narrative ease and comic effect. And of course, the film does not even allude to the fact that any of Riley’s feelings are leading her towards or away from God, which is what Ignatius would want us to consider. But the point still stands that the ability to recognise stirrings within oneself, the value of every single thought and feeling, and the direction in which they are leading you is a hallmark of discernment.  There is every chance that Inside Out will do wonders for its young audiences if it encourages the same attentiveness to their own emotions that they pay to Riley’s.

This film is thoughtful in the literal and best senses of the word. A witty, sharply-observed narrative with momentum that carries it through to the end combines with the high visual standards we have come to expect to ensure that this will be remembered as a classic. I wrote recently that Frozen might be an unexpected medium through which to teach children about discernment; Inside Out might do the job just as well, if not better.