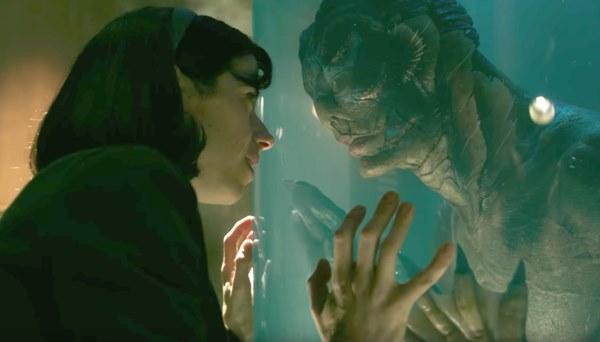 I have no idea what Guillermo Del Toro thought he was doing, but the film seems to me to be a lot better and more interesting than Maher’s hatchet job suggests. The plot is simple (I won’t offer too many spoilers): a strange, amphibious creature (played by Doug Jones) is captured in the Amazon, where the people worship him like a god, and taken to a secret lab in Baltimore for investigation. One of the night cleaners, Elisa (Sally Hawkins), who is mute, begins to communicate with the creature using boiled eggs, sign language and a portable 78 record player. Romance ensues. Meanwhile, the government agent charged with investigating the creature’s potential for use in the space race (Strickland, played by Michael Shannon), and the Russian mole who has infiltrated the laboratory team (Dmitri – Michael Stuhlbarg), battle over its eventual fate. Cue a rescue operation by Elisa, with the help of her next-door neighbour, Giles (Richard Jenkins), an ageing artist who has lost his job at an advertising company.

But the plot is probably secondary to the visual opportunities and relational twists thrown up by the whole engagingly absurd premise, and the genre-play it allows. The opening scene takes us underwater to what begins as an undersea cave, and then opens into the narrow corridor leading to the two apartments of Lisa and Giles, whose furnishing and appearance owes as much to a bygone Paris as to a bygone Baltimore (Madeleine Peyroux’s La Javanaise waltzes in and out of the film’s soundtrack). It is a scene of shipwreck, with the furniture floating high in the room – and on the floating couch, Elisa. That image of bodies in water is reprised in the middle and at the end of the film. The title of the film itself is ‘realised’ in about five seconds of footage that follow the movement of raindrops on the window of Elisa’s bus to work, halfway through the film.

As to the genre-mixing, it is not accidental that the two apartments are above a cinema run by an Italian and playing The Story of Ruth. The film could be read as ‘Creature from the Black Lagoon meets La La Land’ – and as an (allusive) critical commentary on both. The design of the creature clearly echoes the monster of the 1954 movie, as indeed does the heroine’s ‘jeopardy’ (though with a subversive twist). Dance and the sound of musicals is important throughout, from an early moment when Elisa tap-dances down the corridor after a snack with Giles in front of the small-screen black and white TV, until a classic musical transformation scene, which is the absurd high-point of the whole film (see La La Land for the straight, retro version). The wonderfully dastardly Strickland – the uncompromising agent of the state and a biblically-grounded world order – is a great lookalike for Martin Landau, the hero of Mission Impossible and the villain of North by North West: a chiselled-featured man of action, perhaps also with disturbing echoes of Richard Kiel’s Jaws. The world of the old-style apartments transforms to the scientific-age corridors of the early sixties imagination (men in white coats, electric trolley cars, sliding doors, men and women seated at banks of computers). This in fact allows one of the most enjoyable effects of the film: as we follow Elisa and her fellow cleaner, Delilah (Octavia Spencer), working their way through the desks and computers, the glamour of modernity and progress is entirely reduced to a backdrop while Delilah, with a duster, rails about her husband’s shortcomings. The inside of the laboratory where the brutal investigations and the improbable romance take place, however, transforms into something closer to the 1930s imagination, a run-down workshop with iron plates, rusting bolts, a Jules Verne or Mary Shelley technology of iron chambers and vats.

One key to making sense of the role of politics in the film may be the moment when, just for an instant, we see a street protest (civil rights? Vietnam?) on the TV screen in Giles’s flat and he hurriedly switches channels back to the musicals. If there is a novel political question in the film, it might be: what do we choose to see in the fifties and sixties? Maybe, like Giles, we just do not want to look too closely at some of the more difficult aspects of that idealised era, we too just want those Hollywood musicals (consider Hail, Caesar! for another take on the time). The sadistic Strickland, with his cattle-prod, goes home to the perfect American family – smiling models from one of Giles’s now outmoded advertisements – though that domestic scene in turn is given a twist by an anti-erotic love scene into which Strickland’s bleeding hand (from an encounter with the creature) obtrudes. In fact, the romance genre gets constant jolts (some of them gruesome, gory and cruel) throughout the film, with the creature itself as capable of violence as its enemies.

Strickland is a key character. He acts and talks like a cartoon institutional villain, but he is also vulnerable in ways that he does not know, but we do. When he buys his new car, the sales assistant talks him into the most expensive model, the car of the future ‘for the man of the future’. As he drives down the freeway in his fedora, past an open-topped car full of beautiful young women, they wave admiringly – again, like a scene Giles might have produced for an advertisement. He sits in his office, reading The Power of Positive Thinking and exercising power play, while his wound is slowly turning gangrenous. In a Javert-like frenzy he seeks to destroy the one thing that can save him (though not without a moment of quasi-epiphany), imprisoned by a jingoistic philosophy of pride in getting the job done that isn’t bright enough to see its own limitations.

And then there is the enigmatic Elisa. In spite of her silence, she takes more initiative and has more human insight than anyone else in the film, but perhaps because of her silence she remained somehow enigmatic to the end, to me at least. Whether this is deliberate or not, it seems an experimental lesson in the importance of linguistic transparency and the background chatter that goes with it, in enabling us to see people fully. I felt I knew Delilah and Giles much better at the end of the film, largely because they chattered throughout, while Elisa’s interventions were necessarily laconic and her communication symbolic, the silence of water becoming for her a natural medium.

Maher may be right that the film is not especially profound, but it is interestingly weirder than a run--of-the-mill, feel-good movie, with an underlying dead-pan and occasionally dark humour based on the fundamental absurdity (in the good sense) of a girl falling in love with a fish-man from a 1950s horror movie. There are (pace Maher) some excellent lines and, from the title sequence onwards, it is visually compelling.

Our Kind of Traitor