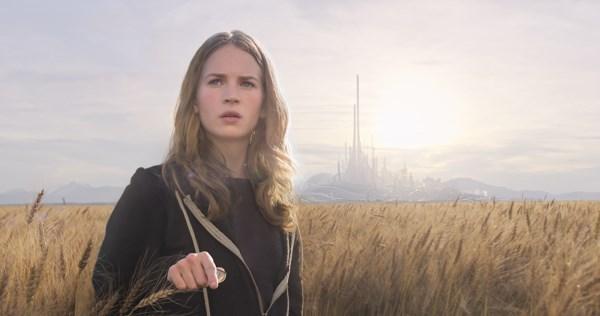 There are two wolves, circling one another. One is called hope, the other despair. They never fight outright, yet they are locked in a struggle to the death. Which one will win? Whichever you feed.

This is the folk wisdom delivered to Casey Newton (Britt Robertson) by her father (Tim McGraw), a NASA engineer working his last job before the administration downsizes. The launchpad at Cape Canaveral is being torn down, and we meet Casey in the guise of a tech-savvy teenage vandal sabotaging the disassembly, fighting her little war to preserve her father’s job, the longevity of space exploration, and a wider positive attitude toward the future. On one foot, therefore, she wears the prankster sneaker of adolescent rebellion, and on the other a workboot of social optimism.

When she gets caught in the act early in the film, the powers that be seize these feet in the shackles of a criminal. Her father posts bail, and as she collects her belongings from the desk at the police station, a strange pin among them sparks an ecstatic vision of a futuristic world. From this point on, she has a foot in two worlds in an additional sense.

Casey sets out on a quest for the place in her vision – a marginally revamped version of the Disney theme park from which the film takes its name (and for which it unmistakably advertises) – and along the way pairs up with Frank Walker (George Clooney), a middle-aged misanthrope who visited there as a boy. When she finds him he is bunkered in a backwoods panic room with video screens showing riots and disasters and a clock counting down to the end of the world.

Their philosophies on life, we quickly discern, are the aforementioned wolves. Age and youth, decline and progress, hopelessness and prosperity – these are the alternatives duelling just below the surface of a drama offering fewer pleasures of fiction than of propaganda. The message is seldom subtle – the villain guards a tower that broadcasts doomsday messages across the universe – and even minor comments are heavy with pedagogy: a barking guard dog, we twice see, does not make footprints; it digitalises at the wave of a hand; and is after all, we are told, a hologram. Added to this, the tone consistently waivers between themes too grave for children and action too frivolous for anyone else.

The main theme, the necessity for visions of hope in a media world gearing up for apocalypse, is a welcome spit into the wind of the zeitgeist. But it is a success only at the level of concepts. Disney has often capitalised on unfocused childhood dreaminess, though, which is probably the best guess as to how the film got the green light. The future of contemporary civilisation, no less than this corporation, may well depend upon a kind of optimism, or real hope in the ability to make lasting improvements today. Which is why, even if the film suggests little reason for such hope beyond the shallow benefits of that hope itself, and even if it fails as cinema, it can at least be commended for anticipating something better tomorrow.