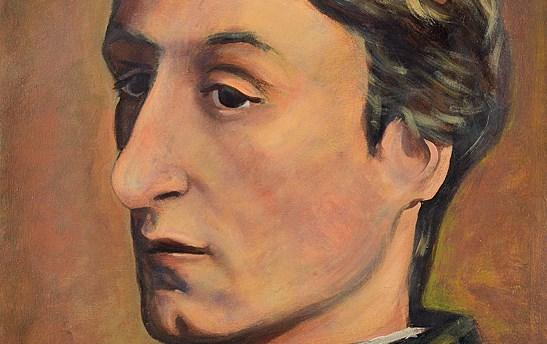 In the 2014 calendar produced by the Jesuits in Britain, July’s focus is on a man who has a claim, ‘at least among those outside the Catholic Church, to be the most influential and successful Jesuit ever’. Philip Endean SJ surveys the life of Gerard Manley Hopkins SJ and asks if there was conflict between Hopkins the poet and Hopkins the priest.

By 19th century Jesuit standards, Gerard Hopkins’s life must have appeared fairly ordinary. Like many Jesuits before and since, he had eccentricities that his contemporaries recorded, more or less affectionately. But his career was normal and unexceptional. Entering the Society as a convert from Anglicanism a year after coming down from Oxford, he followed a normal course of training up till his ordination in 1877. Thereafter he served, without particular distinction, in parishes (notably Oxford and Liverpool) and at Stonyhurst. In 1884, he was seconded to the Irish province, as Professor of Greek at the nascent university college for Catholics. There he died in 1889, aged 44, of typhoid.

He was, of course, also a poet. Probably few, if any, of his Jesuit contemporaries were aware of this spare-time activity. But friends outside the Society preserved his texts carefully, even when they seemed bewildered by what seemed to them their ‘oddity and obscurity’. In 1918, Robert Bridges, a contemporary in Oxford, a medical doctor and by then Poet Laureate, published a volume containing most of Hopkins’s major poetry. Shortly afterwards, Hopkins began to become famous. When writing of the newly canonised St Alphonsus Rodríguez in 1888, he had evoked the passing of ‘years and years by of world without event’, and in doing so was surely saying something about himself. Yet now he has a claim, at least among those outside the Catholic Church, to be the most influential and successful Jesuit ever.

Obviously, the Jesuit family is proud of Hopkins. Wherever he ranks among 19th century English poets, he is surely the most distinctive and original of them. And he was also a faithful and loyal member of the then English province, perhaps heroically so.

What are we to make of this double identity? Some critics have argued that the poet and priest were in serious inner conflict. Others, either Jesuits themselves or sympathetic to Catholicism, have attempted to refute this claim. Hopkins’s initial reputation after the publication of his poetry surely drew on both identities. He cut an exotic figure: his poetic innovations were rendered all the more fascinating by the outré, faintly sinister associations of his Catholicism and his Jesuitry. But in so far as we can judge how he himself lived, he seems to have pursued the two most important commitments of his life out of different aspects of his personality. Hopkins seems less a Jesuit poet than a poet who just happened also to be a Jesuit.

A generation ago, the late Fr Alfred Thomas published Hopkins the Jesuit. Elegantly, comprehensively and lovingly, Alfred pieced together the details of Jesuit formation as Hopkins lived it between 1868 and 1882. What is striking is how little these careful archival researches tell us about what makes Hopkins interesting. The most one can say is that Hopkins, whose personality seems to have lived off contrasts and extremes, found Victorian Jesuit discipline, and the taxing drudgery of his routines in active ministry, foils that stimulated by contrast the dramatic sensuousness of his verse.

For the secular public, Hopkins was exotic. In Jesuit circles, he appeared more as one of our own. When his poetry was becoming famous, the renewals in theology and spirituality that would culminate in Vatican II were also beginning to stir. These developments surely influence the ways in which Catholics read him. Jesuits were beginning to think of Ignatius not so much as a militarist disciplinarian but rather as a liberal humanist, a contemplative in action, one who could find God in all things. The discovery of Hopkins in many ways both fed and fed off this wider change in religious sensibility. It became common to see in Hopkins’s sacramental vision of nature an application of Ignatius’s Contemplation to Attain Love.

The connection was probably inevitable, even providential. But it had the effect of hiding from Hopkins’s religious readers how very odd his theology and spirituality would have been within the Victorian English province. Once you pick up from Fr Thomas and others how rudimentary and conventional Hopkins’s Jesuit religious training actually was—to a Jesuit today it seems almost unimaginably barren and unenlightened—then Hopkins’s ecstatic visions of God in nature, and indeed the raw emotion of his terrible sonnets in the Dublin period, appear only the more startling. If there is an intellectual source of any kind for this creativity, it is more likely to lie in what Hopkins picked up in Oxford, from the renewal in patristic studies promoted by High Church Anglicanism.

When Jesuits and their friends today celebrate Hopkins, they can easily read him for how he embodies what has become an important aspiration for Jesuits today: dialogue with modern culture, and perhaps even a hope that we might influence the way that culture develops. All well and good. But Hopkins himself seems to have had no interest of this kind. Once ‘The Wreck of the Deutschland’ was turned down by The Month, he seems to have given up any idea of going public with his verse.

When his friend, Canon R. W. Dixon, remonstrated with him on this score, Hopkins replied in a way that made his position plain:

When a man has given himself to God’s service, when he has denied himself and followed Christ, he has fitted himself to receive and does receive from God a special guidance, a more particular providence. This guidance is conveyed partly by the action of other men, as his appointed superiors, and partly by direct lights and inspirations. If I wait for such guidance, through whatever channel conveyed, about anything, about my poetry for instance, I do more wisely in every way than if I try to serve my own seeming interests in the matter. Now if you value what I write, if I do myself, much more does our Lord. And if he chooses to avail himself of what I leave at his disposal he can do so with a felicity and with a success which I could never command.

Hopkins wrote this passage probably on the third centenary of Campion’s martyrdom, 1 December 1881, which happened to be the second rest day during his tertianship long retreat. After this opening passage, he tries to justify his intuition with arguments that are highly questionable, and something of a historical curiosity, in support of a claim that ‘shew and brilliancy do not suit us’. But there is no need to let that dubious material colour our reading of the vocational testimony with which Hopkins begins. His poetry is God’s. Decisions about its publication are not in the end about his own ambition but about how God might use it. Unless and until a sign comes from God that publication would be appropriate, Hopkins will keep his poetry to himself, trusting that God’s ‘lovely-felicitous providence’ will look after it. ‘As things have turned out’—so Fr Christopher Devlin commented in his edition of Hopkins’s religious prose in the 1950s—‘who dare say that he was not right?’

On the evidence we have, those so inclined will always be able to convict Hopkins of using pious language to rationalise less noble motivations: a fear of ridicule and rejection, or an internalised rigorism that has little to do with true Christianity. But another story is also possible, one that is challengingly inspirational. Hopkins did, despite what is sometimes said, value his poetry. Something in him, within due limits, was prepared to nurture a creativity that nothing in his Victorian Jesuit socialisation reinforced. We have a retreat note of Hopkins’s from September 1883:

I earnestly asked our Lord to watch over my compositions, not to preserve them from being lost or coming to nothing, for that I am very willing they should, but they might not do me harm through the enmity or imprudence of any man or of my own; that he wd. have them as his own and employ or not employ them as he shd. see fit. And this I believe is heard

It thus becomes possible to see Hopkins as exemplifying an important teaching from a text he probably never read: the opening of part X of Ignatius’s Constitutions. Yes, it is important that we learn to use our natural talents well; yes, we normally have some idea of the fruit that our engagement brings forth. But these things are not essential. What matters is that we entrust things to God. Even in the apostolate, ‘the means which join the instrument with God, and arrange it so that it is well governed by his divine hand, are more effective than those which arrange it with regard to people’. In what appears to us as trivial, or even failure, God’s power may indeed be accomplishing ‘abundantly far more than all we can ask or imagine’ (Ephesians 3:20).

Hopkins made his last retreat in January 1889, and the notes, fortunately, survive. Nothing at that point suggested that his death would come six months later. His first meditations lead to an outpouring of raw pain at the “five wasted years” he has spent in Ireland: ‘I am ashamed of the little I have done, of my waste of time. … All my undertakings miscarry: I am like a straining eunuch. … O my God, look down on me’. As the retreat moves on, it is as though he is protecting himself from a recurrence of such self-loathing. With a cerebral ingenuity verging on the manic, he writes about three gospel stories of Christ’s initial public appearance: his Epiphany when the wise men come, his baptism by John and the miracle at the Cana wedding.

In the final surviving paragraph, Hopkins notes something important about the Cana story that most readers miss. The guests never get to drink the new and better wine. Despite the worries of Jesus’s mother, the original supply lasts perfectly satisfactorily; the guests continue revelling while the huge water-pots are being filled. The story ends in a way typical of John. The miracle remains a secret among those in the know: the waiting staff, the bridegroom and the disciples. Jesus’s hour has indeed not yet come: only later will his glory be revealed.

Christopher Devlin noted that Hopkins’s final sentence about the wine supply at the wedding—‘there has been no stint, but there has been an unwise order in the serving’—anticipates some later judgments of his life and work. But for me there is a deeper, more spiritual message to be taken. The paragraph as a whole stands as a comment on Hopkins’s vocation. In his lifetime, Hopkins’s ‘heart in hiding’ was largely unseen, marked by ‘sheer plod’ and more than a fair share of ‘the blight man was born for’. Yet even so he made, almost despite himself, a beginning. It was for God, and for others, to carry that beginning forward—a God whose work we can only let ‘size / At God knows when to God knows what’.