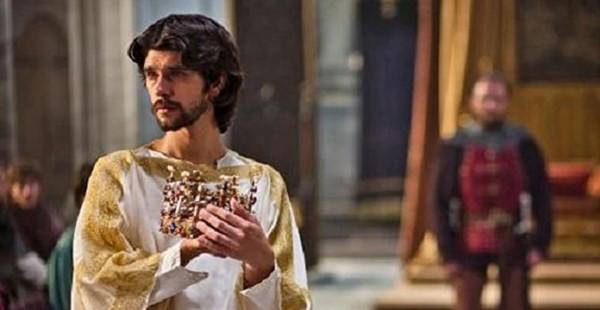 There will be scant opportunity to see any live performances of Shakespeare this 23 April, the day on which we traditionally observe the anniversary of the playwright’s birth and death. But we still have the screen, so Luke Taylor SJ recommends the BBC’s adaptations of Shakespeare’s history plays, The Hollow Crown, and invites us to use the drama as a lens through which to think about our place in the history that is unfolding around us.

What better way to celebrate Shakespeare Day than by watching The Hollow Crown (2012-2016)? The BBC’s seven-part interpretation of Shakespeare’s history plays, set over two series, traces the division and fall of the house of Plantagenet up to the beginning of the Tudor line, an unforgettably dramatic epic that ushers Britain from the late middle ages into the modern world.

Nothing replaces seeing Shakespeare at the theatre. In lockdown, however, televised Shakespeare has its own advantages. Even in London, I could never have watched eight Shakespeare plays back-to-back. Yet from a Parisian attic, the nostalgic patriot in me thrills to iconic shots of Britain – from the sweep of Dover’s cliffs to northern moors, from Westminster Abbey to the Tower of London – scenes which television summons more vividly than even Shakespeare’s Chorus.

The Hollow Crown showcases some of Britain’s most gifted actors. It begins with Ben Whishaw’s compelling interpretation of Richard II, a self-regarding and effete ruler who loses control of his nobles and walks a via dolorosa to imprisonment and death. Richard’s opposite, Rory Kinnear as Bolingbroke, represents a very different kind of sovereign. Rising to power by opportunity and public acclaim rather than God’s anointing, Kinnear perfectly judges Bolingbroke’s air of slight puzzlement at the turn of fortune’s wheel.

With clouds gathering over a divided kingdom, Patrick Stewart delivers John of Gaunt’s ‘This sceptered isle…’ speech with the passionate gravitas of a master actor before Jeremy Irons, another giant of stage and screen, picks up the role of a now grizzled Henry IV, sick from disappointment in his wayward son and with guilt over his own power grab. The action alternates between the darkening shadows of national tragedy at court and Prince Hal’s comic bildungsroman in Eastcheap.

A handsome Tom Hiddleston convincingly combines the prince’s youthful antics with intimations of the mastery he will command as king. Yet for me it is Simon Russell Beale’s Falstaff who steals the show. Fat and gouty, yet a mountain of vital energy; a liar and a coward, yet hilariously improvising his way through every situation – Beale made me cry with laughter. And that dreadful moment when Hal finally rejects him! That brought tears of another kind to my eyes.

It felt appropriate to watch Henry V with a French friend. The Plantagenet line derives, after all, from France, and Henry V marries the French princess, Katherine, as his son Henry VI will marry the French Margaret of Anjou. Yet as Hiddleston progresses from Harfleur (‘Once more unto the breach, dear friends’) towards Agincourt, I realise afresh how different things look from the English and the French perspectives. The line of celebratory patriotism treads a very narrow path amongst the wounded sibling relationships that continue to shape European politics.

In a Renaissance context, Shakespeare’s theatre stages the self-consciousness of a Protestant nation freshly defined in opposition to its Catholic European neighbour. Through the onstage presence of the English captain Gower, the Welsh Fluellen and the Irish Macmorris, Henry V also forecasts the resolution of internal tensions as the British nations unite – an aspirational union which would in fact take place under James I of England and VI of Scotland just a few years later. Even Shakespeare’s prophetic soul, however, could not have forecast the turns of British history since.

Watching The Hollow Crown after Britain’s exit from the European Union, at a time when the union of England and Scotland looks particularly fragile, I am struck by how much Shakespeare’s histories resonate with the current moment. ‘History never repeats itself,’ remarks Mark Twain, ‘but it does rhyme.’ Broken and renegotiated relationships with continental Europe, the ongoing internal tensions within Britain, all lived through the public and private lives of British royals – are we still living within Shakespeare’s drama?

The funeral of His Royal Highness The Prince Philip, Duke of Edinburgh, in a sparsely populated chapel, was a stage on which many people will have seen the isolation of the year that preceded it. The figure of the widowed Queen Elizabeth II became, for many, an embodiment of our questions. Who will we become, individually and collectively? What binds us together, and what keeps us apart? The sight of two princes united in mourning their grandfather was juxtaposed with constant reminders of what divides them: where Henry V resolved the tensions between his private life and his public role upon his father’s death, another Prince Hal has recently shared his very much unresolved tensions on the world stage in an Oprah Winfrey interview.

Things can get worse, of course, than self-chosen exile in Los Angeles. How much worse is sketched in the second tetralogy of the history plays, which covers the loss of the French territories gained by Henry V and Britain’s descent into a bloody civil War of the Roses. Although their events chronologically follow those depicted in the plays of the first series, the three parts of Henry VI were written first and perhaps in collaboration with other playwrights. Director Dominic Cooke justifiably condenses their sometimes-patchy action. Yet even that scrappiness is part of the point, the spectacle of a Hobbesian state of nature in which father turns against son, brother against brother, each against all.

Tom Sturridge plays a damp-eyed and pious Henry VI, overtaken by the violence of the world into which he is thrown as infant king. In this world, a virgin saint like Joan of Arc (Laura Frances-Morgan) is burnt as a possessed madwoman. In this world, the moral spine of the nation, the Lord Protector Humphrey Duke of Gloucester (Hugh Bonneville), is murdered in the tower whilst Queen Margaret (Sophie Okonedo) makes love to the Earl of Somerset (Ben Miles).

If that last scene owes more to Game of Thrones than to Shakespeare’s text, it does echo the Machiavellian logic of Richard of Gloucester, who seduces and murders his way to the top of England’s darkened realm. Played with superb energy by Benedict Cumberbatch, Richard successively dispatches his brother, his nephews and his wife, only to discover at his nadir that evil is fissiparous, schizophrenic: Richard has murdered his own soul before Richmond kills Richard’s body.

As the camera pans upwards from Bosworth Field’s crazy quilt of fallen bodies, I am left to ponder. Richmond is crowned as Henry VII, giving the hope of rebirth to the nation. Yet the Tudors would have more than their own share of violence, and the War of the Roses would be followed by the equally traumatic civil wars of the seventeenth century. Is history then finally a comedy or a tragedy? Is it an epic or merely a farce? Does it form a line of destiny or go around in a circle?

Answers will vary depending in part upon our own point of view. A male and martial ethic underwrites most of the world of Shakespeare’s histories. Things look different from the female perspective of Princess Katherine (Mélanie Thierry), who in turn inhabits a courtly milieu unimaginable in the social underworld of Mistress Quickly (Julie Walters). Blowing through the lives of men and woman, old and young, aristocrat and commoner, northerner and southerner, English and Scottish, the wind of history wrecks and raises in the same breath. Shakespeare’s reticent and enigmatic genius enabled him to live many lives. His history plays enable us to see the world, at least imaginatively and temporarily, through the eyes of the other.

Perhaps it is through feeling others’ experiences that we find our own place within history. We didn’t choose the scene into which we were born, yet the signs of the times give us cues to the roles that we may play. Shakespeare’s history plays artistically shape a chunk of history into a narrative. Our present improvisations may become part of tomorrow’s script.

The Hollow Crown is available to stream on Amazon Prime and BritBox.

A Catholic look at 'Downton'