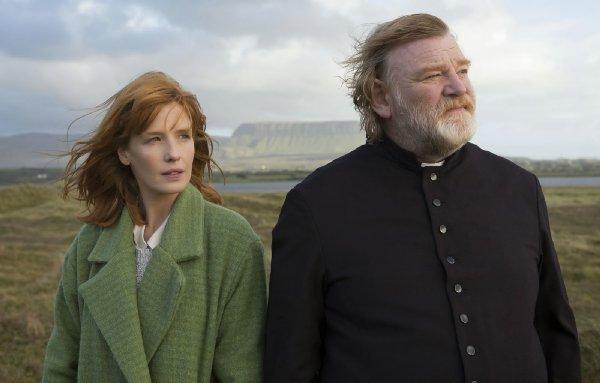 In the eyes of many, the revelations of the past few years have ruined much of the Church’s credibility.  The evils of the abuse perpetrated by priests, professed religious and laity have struck at the very heart of the Church’s identity. The pain and anguish this has caused is perhaps felt strongest in Ireland, not only because of the huge number of scandals that have come to light, but also because of the role of the Church in Irish life and society.  The scandals have taken their toll. Mass attendance, generally used as the good judge of both religious belief and trust in the institutional Church, has fallen from 91% in 1972 to 30% in 2011.[i]

Prior to watching Calvary, then, I expected this Irish Film Board-funded film to present a view of the priesthood and of the Church which was entirely negative, without any redeeming qualities.  But what the film achieves is much more powerful.  By simply showing a faithful priest, the film points to the weakness and failure of other priests who abuse their position and, through their position, other people.

Father James Lavelle is parish priest of a remote village on the west coast of Ireland.  He is clearly a talented and clever man – much cleverer than his parishioners and his curate – and shows genuine concern for the people he serves. He isn’t in charge of a wealthy parish: his church is little more than a hall, and his bedroom is sparsely furnished with whitewash walls and no photographs.  He is left alone with small children on a number of occasions throughout the film and, while the audience expects some kind of impropriety to take place, nothing happens.  The serial adulteress in the village flirts with him and, again, nothing happens.  His daughter arrives, but we soon discover she was conceived from his marriage before he entered seminary.

The film is utterly absorbing, mainly because the tension begins to ratchet up almost as soon as the film begins: somebody enters the confessional and tells the priest that he will kill him in a week’s time, giving him a week to put his house in order.  It is, as Father James himself says, a pretty startling opening line.  Father James knows who the person is; we do not, and so this film is not some kind of tawdry whodunnit.  Instead, we follow Father James as he puts his life in some kind of order while continuing to serve his people who are in various stages of moral decay, from extra-marital affairs to paying for rent boys, from drink and drugs to financial collapse.  The strength of the acting of these characters is extraordinary.

But the film does not shy away from critique of the Church.  The complicated history of the Church and colonialism, its relationship with wealth and power, its perceived anti-Semitism and moral fibre (or lack thereof) at the time of the Holocaust all come into question.  But all of this is summed up in the simple putdown given by the village barman, who tells Father James bluntly that the time of ‘his sort’ is over.  The Church, and the relationship between the Church and its people, is not the same anymore.

The most poignant part of the film came towards its close. It won’t spoil the plot for you to know that Father James feels that the most underrated virtue is mercy, and that the Church talks far too much about sins and not enough about virtues.  This immediately made me think of Evangelii Gaudium[ii] in which Pope Francis, citing St Thomas Aquinas, says that he sees mercy as the key to spreading the joy of the gospel.  By receiving mercy, we are able to show mercy to others.  Shakespeare was not wrong when he wrote, ‘The quality of mercy is not strained... It is twice blest; It blesseth him that gives and him that takes.’[iii] The film, at its end, turns from a fairly honest assessment of the mess of the Church into an almost theological reflection on the beauty of lives shaped by Faith, Hope, and Love, leaving the viewer with no doubt that more mercy would make the world – and the Church – a better place.

[iii] The Merchant of Venice, Act IV, Scene I