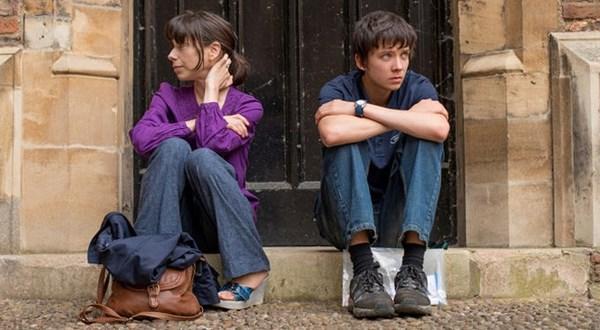 We know from the start that there is something unusual about Nathan. He loves patterns, he admits, and after an opinionated discussion about dinosaurs, his examiner explains to his parents that there are going to be some challenges. Nathan is on the autistic spectrum, he relates, which will involve challenges, but also some special opportunities. ‘You’re like a wizard,’ his father (Martin McCann) tells him, ‘with special powers we Muggles do not understand’.

Calamity strikes, however, and this reassuring voice is silenced. Trauma creates an additional challenge for Nathan, who shrinks from the world as from his mother’s touch. Aggrieved, and a little desperate to maintain some link with her son, Julie (Sally Hawkins) enlists the help of the local school teacher, Humphreys (Rafe Spall), who steps into a pseudo-paternal role as a loveably surly and foul-mouthed mathematics tutor.

Jump a decade or so, and Nathan as a teenager (Asa Butterfield) is still unusual: awkward –exceptionally so – withdrawn and, it turns out, a whiz at maths. He sits the exam for the British squad at the International Mathematics Olympiad, earns entry to their summer training camp in Taiwan and the adventure begins. If it all sounds like the preamble to a heartwarming story of ‘Disadvantaged Youth Wins All’, it will be worth pointing out that the film is British, not American. Disappointments temper triumphs, but in a way that is ultimately the opposite of disappointing.

An illustration of this is the romantic subplot between Julie and Humphreys. In a heated moment, the latter – who suffers from MS – has to confess that there is only so far he can take things physically. There is an instant of shocked understanding, and then she accepts the situation with a smile. This is anticlimax of the pleasantest kind and it prepares us for the release of the film’s real dramatic charge.

Like many a hero who enters the special world of adventure with a goal that then the adventure forces him to revise, Nathan goes to maths camp thinking that x + y only refers to some variables in an equation. His beautiful Chinese study partner, Zhang Mei (Jo Yang), requires him to revisit these terms. What began as an idiosyncratic pursuit of self-definition and -preservation – staying untouchably good at maths – now leads to that very system becoming vulnerable: in order to maximise his computational skills, he must also open up and risk undermining his self-contained security.

This is the stuff of good drama, and X+Y gets better. With his ability and intimacy both building, Nathan approaches another crisis: in order to have a meaningful relationship with Zhang Mei, he will have to address what motivated him to flee into maths in the first place. To get what he wants he might lose what he came for, and although it is torture for him, it is the best kind of drama for us.

Much more could be said about a film so eloquent in its understatement, but I will conclude with this. X+Y tests our sympathy. It presents us with someone unusual: an autistic child, outwardly unrelational, whose unidimensional desire to know nothing but numbers seems alien to most of us. But his education is also ours, and as he grows into what might be called the ‘higher maths’ of human experience, he is suddenly not so strange. He learns about loss, perplexity and even mystery, as in the case of x’s and y’s. There’s no doubt they are different, but the variables and their sum can all be equal in the cases of zeros, infinities and love.