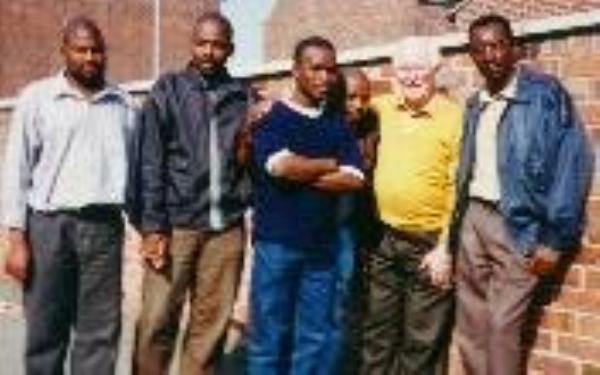 Bandi Mbubi, who came to the UK from the Democratic Republic of Congo as an asylum seeker twenty years ago, tells his story to Thinking Faith in Refugee Week. Bandi describes how the Jesuit Refugee Service were able to ‘accompany, serve and defend’ him when he was detained upon his arrival in the UK, and how he has been inspired to do the same for others.

It has been twenty years since I first came to the UK. I fled the Democratic Republic of Congo (DRC) – Zaire, as it was then called – to escape persecution: I had been a student activist at the University of Kinshasa. Many things have happened since my arrival in the UK. I have had a family of my own – my wife and I now have two sons who bring us a lot of joy (and hard work!) and for whom we are thankful to God. But I would like to begin here to give you a glimpse of my journey, from when I arrived in the UK as an asylum seeker to where I find myself today.

I sought asylum upon my arrival at Heathrow Airport and was immediately placed in detention. I spent my first two months in Hammondsworth Detention Centre, and the following two in Haslar Prison. I did not know what to expect at any given moment. Each passing day presented the possibility of being released, remaining in detention or being deported. In my conversations with fellow detainees, we would often wonder why asylum seekers are not told how long they would be kept in detention. We would reason that even convicted criminal offenders know their sentence. This uncertainty and the real possibility of being sent back were hard to bear, and I became depressed. It did not help that in the midst of all this, I missed my family and friends. I was 21 years of age and I could not communicate in English; I felt lost, confused, frustrated and lonely.

After I had been in detention for a week, I learnt that there was a priest, Bernard Elliot who was visiting detainees. He is actually a Jesuit brother, but we continued to call him Père Elliot even after learning that he was not an ordained priest. He brought toiletries and clothes to detainees, and former detainees often accompanied him on his visits: this somehow gave us hope that we too could one day be released. More importantly, he brought with him his listening ear, his laughter and his warmth. Even though he didn’t speak any of the languages that Congolese detainees spoke, it never really mattered. It is through people like him that I understand the call to all Christians to be ‘Christ to one another’. Through Bernard, Christ was certainly there, and I thank Him for being there.

I always felt a great sense of hope after each of Bernard’s visits and one in particular still stands out. When we first met I had a sleeveless jacket with a t-shirt underneath. He could tell I was cold, but he never said a word. I did not have any clothes other than the ones I was wearing. When he next visited, without me needing to ask he brought me a jumper, my first in the UK. It was not so much the jumper in itself that touched me, but the way he had noticed my needs, his compassion.

After my release from detention on 16 August 1991, Bernard would continue to visit me at home. I would also visit him in Cavendish Square at least once a fortnight with a close friend I had met in detention. We knew we could always read magazines and newspapers on African affairs when we visited. It was not yet the age of the internet and so that was literally the only way of remaining informed about the political situation back home. Food was not guaranteed, but when it was available it was sometimes sardines and bread, sometimes a full meal. But there were always biscuits, tea and coffee.

Bernard had a good network of people that he could call on when detainees or former detainees needed help. He never felt shy about asking for help on someone’s behalf. He would make phone calls to and arrange meetings to advance the cases of those who needed his help. When the time came for me to go to university, he put me in touch with many people who offered me invaluable practical advice about studying in the evening so that I could work during the day to pay for my studies, as I was not entitled to get an educational grant. I also learnt through Bernard about a grant-making trust, which paid two thirds of my fees to study part-time at university.

I had also met an amazing family through my local church: they treated me like a son, offering me additional emotional and material support that I greatly needed. I was not able at the time to appreciate the role they played in my life in the UK; perhaps I was just too blind to see it, as a young man. Christmas was not as lonely as it could have been because I had them to spend it with. They never forgot my birthday. They took me to places I could not possibly afford – I remember singing my first ‘Rule Britannia’ at the proms with them!

When I came to the UK, I had hoped to return to the DRC as soon as the political unrest there subsided. I had hoped to contribute to the development of the DRC. But it was not to be so. In 1996, a Congolese rebel group, known as the ADFL, backed by Rwanda and Uganda, waged war against Mobutu’s regime and took control of the country in 1997. And in 1998, the new president, Laurent Kabila, unceremoniously asked the armies that had supported him to leave and another war ensued. Kabila called on Angola, Zimbabwe and Namibia to support him in this new war against his former allies. In 1999, all six countries in the conflict signed a peace agreement and a UN peacekeeping force, the world’s largest, was created. The International Rescue Committee estimates that there have been over 5 million people killed as a direct or indirect result of the conflict.

A close friend told me, not long ago, that I reminded him of his Irish parents who always dreamed of returning home to Ireland but never made it. His advice to me was that your home is where you find yourself. This does not lessen the burden I feel for those who have stayed behind. How can I not look back when I know full well that every passing day is a day of misery for them?

I have tried to channel my own experiences into something positive while I have been in the UK. Ten years ago I began working with homeless people. Last year, after working for nine years at the Manna Centre, a day centre for homeless people in London Bridge, as an advice worker and a campaigns officer, the management committee appointed me the Centre’s Director. During my time at the Manna Centre, I have had the opportunity to work with people who feel as vulnerable as I once did, people who the world dismisses but for whom Christ was prepared to give his life. Through all that I have received from others, I have come to understand what Christ means when he says ‘freely have you received, freely give’.

About ten years ago, Bernard Elliot also invited me to join the Management Committee of the Jesuit Refugee Service. As age took its toll on him and he became less and less active, I worried then that the wonderful work of the Jesuit Refugee Service would suffer as a result. But during this past decade, seeing Louise Zanre and her team in action has strengthened my faith in God that He will always provide the workers to plough His fields.

Bandi Mbubi is the Director of the Manna Centre, a day centre for the homeless in London Bridge.