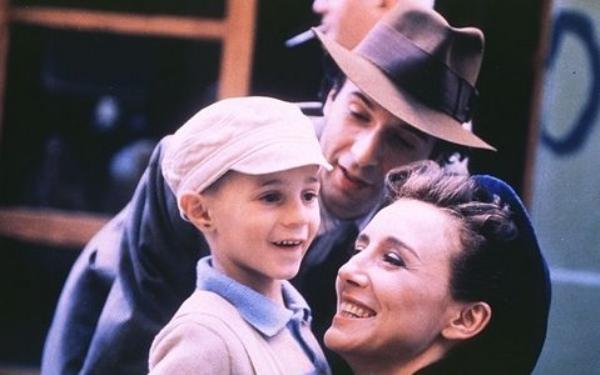 We are continuing our ‘Virtues on Film’ series into the Easter season. Frances Murphy explores hope through the lens of a film that epitomises the sustaining and life-changing power of the virtue: Roberto Benigni’s Life is Beautiful.

It is important to know that I can always continue to hope, even if in my own life, or the historical period in which I am living, there seems to be nothing left to hope for. Only the great certitude of hope that my own life and history in general, despite all failures, are held firm by the indestructible power of Love, and that this gives them their meaning and importance, only this kind of hope can then give the courage to act and to persevere.[1]

These words from Spe Salvi, the second encyclical of Benedict XVI, are found in a section towards the end of the letter entitled, ‘Action and suffering as settings for learning hope’. Roberto Benigni’s 1997 film, Life is Beautiful (‘La vita è bella’), could well have had the same subtitle, and the words above would not have sounded out of place had they been spoken by its main character.

This section of the encyclical begins with the short but weighty statement that, ‘All serious and upright human conduct is hope in action.’[2] Life is Beautiful is at once a heart-warming and heart-breaking illustration of such conduct. The film begins with the delightful and comical story of the blossoming romance between a happy-go-lucky Jewish Italian, Guido Orifice (played by Benigni, who won an Oscar for his performance) and the object of his affections, Dora (Nicoletta Braschi). But the narrative takes a turn for the tragic when Guido is seized, along with the now-married couple’s young son, Joshua, and Guido’s uncle, Eliseo, on Joshua’s birthday. Dora, although she is not a Jew, follows them and forces herself onto the train that will take her family to a concentration camp.

The rest of the film follows their time in the camp: Dora is isolated from the family and has to remain with the women; the elderly Eliseo is separated from the younger men; and Guido and Joshua find themselves enclosed in a cramped dormitory with dozens of other men. Determined to hide the reality of their situation from Joshua at all costs, Guido convinces Joshua that he is on a birthday adventure, that they are there to play a game and win the first prize, a real tank. He spins a comprehensive yarn to the young boy, and enlists the help of their fellow detainees to assure him of its truth: the first person to 1000 points wins the prize, but you lose points by crying for your mother, complaining that you are hungry or being seen when you should be hiding. The big, scary men who shout all the time are just there to judge the game, but you cannot let them see that you are scared or they will deduct points from your score.

Guido lets his mask slip when he is away from Joshua – his fear, exhaustion and anger are all eating away at him, but it is for his son’s protection and happiness that he is living. He behaves, very literally, hopefully, and this ‘keeps [him] from discouragement; it sustains him during times of abandonment’.[3] That his hope’s object is his son’s happiness, rather than his own, does not mean that he hopes in abstraction, or at a lesser degree than if his hope was for himself. Our Pope Emeritus and Thomas Aquinas are both clear that hope is not a matter just for the individual, but for a community united in love – for one another and for Christ.[4]

Their time in the camp is something like limbo. Guido’s anxiety is assuaged not only by his own performance but by the occasional glimmer of good fortune – in a chance meeting with an old friend, or the seizing of an opportunity to get Joshua a decent meal. However, his fear is also enhanced by his confrontation with the horrors of the concentration camp and by his separation from his wife. But it is only in such an interim state that we really can hope. For Aquinas, hope is the prerogative of the ‘wayfarers’, be they in this life or beyond; those who are neither blessed nor damned.[5] Those who are blessed do not have to look to the future for their perfect happiness, and so have no need to hope; and the punishment of the damned is certain and eternal, therefore they cannot hope.

The ending of the film is something that resonates particularly strongly at this point in the liturgical year. Still completely under the illusion of the game and having followed the strict instructions of his father not to leave his hiding place until everything outside is quiet, Joshua emerges from to find the camp completely still. The war that he knew nothing of is over and the camp emptied; and, although he does not know it, his father has been shot dead by a guard as he attempted to round up his family to escape. This silence is broken by an American tank which drives towards him – in Joshua’s eyes he has, as his father promised him that he would, won the game. The parallel here is with our Easter lives: the horror of the cross is mirrored in that of the concentration camp; the absence that defines Holy Saturday is represented by the stillness of the camp once the drama of the war is over; and the victory of Easter Sunday, which is the basis of our hope, is the triumph in the game – that which we have longed for, and for which someone else has suffered, breaks into our lives just as we are struggling to adjust to our loss.

Joshua’s reunion with his mother is joyful, and she celebrates his ‘victory’ with him. And so we are still permitted our happy ending, even after death. The foundation of our hope, and of our faith (Benedict remarks how the two words are often used interchangeably), ‘cannot be taken away from us even in death.’[6] This is because hope is not something static, or something that has a specific objective to be achieved, after which we move on. Hope is, of its essence, dynamic and continuous. That the word ‘hope’ is both a noun and a verb is not insignificant; in fact it is crucial to an understanding of the virtue and how it is to be lived:

…the Christian message was not only ‘informative’ but ‘performative’. That means: the Gospel is not merely a communication of things that can be known – it is one that makes things happen and is life-changing …The one who has hope lives differently; the one who hopes has been granted the gift of a new life.[7]

In this case, Guido lived differently because of his hope; the performative dimension of his hope meant that the life he was granted was that of his son.

Guido’s hope was extreme; it reached beyond ‘things that can be known’, as hope always does. To think of hope in terms of targets that we can achieve via our own initiative merely reduces it to optimism, to wishful thinking, to an anticipation of progress which can be measured. In fact, hope must be the product of our faithful imagination, not of our careful planning, and it may not have an exact goal - at least not one that we can conceive of, let alone achieve, without God’s grace. But at the same time, the distant object of our hope does not paralyse us into inaction, nor does our certainty of divine participation instil in us a complacency: ‘Faith is not merely a personal reaching out towards things to come that are still totally absent: it gives us something’[8] We see this very clearly in Life is Beautiful in Guido’s perseverance in his task – his hope is active and it sustains him; without it, he and his son would undoubtedly perish.

Hope, then, must always take us further than we think we can go and the extent of its ambition should never deter us. If our longing is directed towards something that sits neatly within the Kingdom of Man then our horizons are too narrow, and we are falling short of the Christian hope grounded in the love of God, which is the content of our faith and on the basis of which we are redeemed.[9] The salvation we witness in Life is Beautiful, thatof a young boy’s life from the darkest and most punishing of circumstances, seemed beyond the realm of possibility; but the ‘indestructible power’ of his father’s love pushed the boundaries of this realm and demonstrated that true hope does not limit itself to what lies within our means.

Ah, but a man's reach should exceed his grasp,

Justice in A Royal Affair by Nathan Koblintz