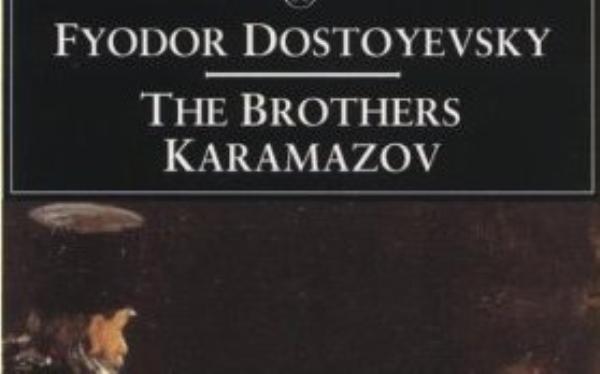 Our summer recommendations of books that ‘You really must read’ included not only epic novels but also lesser-known short stories, science fiction and poetry. Niall Leahy SJ guides us back to perhaps more familiar ground as he extols the virtues of Dostoevsky’s classic, The Brothers Karamazov: ‘a number of life stories, all nestling comfortably within the big Story of Life.’

Many readers of Thinking Faith will no doubt have read The Brothers Karamazov. If you are among those who have not, then it is likely that you have been exhorting yourself to do so for a while now. Unfortunately for you, it is only one of many brilliant but bulky Russian novels that are probably vying for your attention. I feel your pain. I have read half of War and Peace, and Crime and Punishment still eyes me up every time I walk into a bookshop. So at the start of the summer, I stuffed a fellow Jesuit’s copy of The Brothers Karamazov into my rucksack, confident that I would be sufficiently lackadaisical in my reading efforts for it to last me until August. It was so engrossing that I had finished it by early July and found myself faced with the decision of jettisoning it there and then or hauling it around for 2 more months so that I could return it to its rightful owner.

I grew up in a village – actually, make that a country – where everyone makes it their business to know everyone else. No surprises, then, that I instantly warmed to the narrator’s extensive local knowledge and his willingness to fill the reader in on all the recent happenings in his beloved Russian backwater. He is eager to divulge the juicy details but he wants you to pay attention and learn the moral of the story. So yes, it is a story about morals. You could also call it a love story. Come to think of it, it is a broadside against atheistic philosophy. Suffice to say that there is quite a lot going on in this novel, like a set of Russian dolls – a number of life stories, all nestling comfortably within the big Story of Life.

It is about something and it is about everything. The fortunes of three brothers hang in the balance. Meanwhile, Russia is in the throes of a struggle between Church-backed imperialism and atheistic socialism. These philosophical battles are waged against the backdrop of a spiritual realm that is overflowing into this porous world. Despite painting on an expansive canvas, Dostoevsky’s psychological style prioritises giving the reader access to the inner turbulence of each character. He painstakingly tracks the intellectual, emotional and spiritual movements of the protagonists, eking out this massive story one thought at a time.

The brothers of the title are Alyosha, Dmitri and Ivan Karamazov, who have long suffered their odious father, Fyodor. The plot hinges on the enmity between Dmitri and Fyodor, two jealous lovers who find themselves competing for the same woman, Gruschenka. Neither spares any effort in attempting to outmanoeuvre the other. Fyodor is a boor and Dmitri is a squanderer. Unfortunately for them both, Gruschenka is as capricious as she is beautiful, flitting between her suitors to her own amusement and to their despair. Actually, they all display such connivance that one would be forgiven for wishing them all good riddance. Amidst all the jostling for position, Fyodor is killed in his own home by an intruder.

The authorities are convinced that Dmitri is the guilty party but he protests his innocence strongly. The evidence against him is compelling, although insufficient to justify a firm conclusion either way. So has Dostoevsky contrived a situation where no sure judgment is possible? Well, if we are to put our faith solely in empirical evidence, then justice cannot be delivered by fair means. However, Dostoevsky’s heroes have recourse to another means of arriving at the truth: they can see the heart. It requires much faith and purity of heart to accept Dmitri’s version of events. Some characters possess these heavenly virtues in abundance. The Elder, Zosima, a monk to whom people attribute supernatural gifts, bows down before Dmitri, perhaps as a sign of reverence for the innocent one who will suffer. Alyosha begins the story as a novice to the Elder, under whose tutelage he cultivates his ardent heart and hones his judgment. Like his mentor, his heart and mind become sensitised to the concealed truth. Other characters have to struggle to attain the clear-sightedness that grace affords, but eventually manage to do so. Many more remain blindfolded by their eagerness to doubt and condemn. Dmitri is the man put on trial but Dostoevsky places all of his characters on his own scales of justice. Judgment is based on how one acts in the face of condemned innocence or, otherwise put, what one sees at the foot of the cross. As an author, he knows how to get to the crux of things.

Dostoevsky is credited with possessing great insight into the human soul and so one would expect him to be a hit with 21st century readers who are generally attuned to our inner workings. That said, if one were to write a popular spiritual novel today, it would not look anything like this one; the religiosity is just too overt and 19th century Russia may strike today’s readers as over-enchanted. The impressive set-pieces – like the grand inquisitor or Ivan’s visit from the devil – might also be too theatrical to be taken without a pinch of salt. But even if the text is slightly overloaded with high drama for today’s tastes, the heroes ultimately cannot afford to be swept up in it; they must simply stay the course. For all the religious hysteria, miracle-hunting, saints and demons, the faces of good and evil are shown to be human faces.

I believe that when you pick up a piece of classic literature, you waive your right to be addressed as a ‘modern-day reader’. But this book continues to speak to people. The actor Martin Sheen is on record as saying that The Brothers Karamazov was instrumental in his own personal faith journey. His testimony is a reminder that even though religious and literary sensibilities may have changed since Dostoevsky’s time, the way to faith has not.

I should have read it years ago.