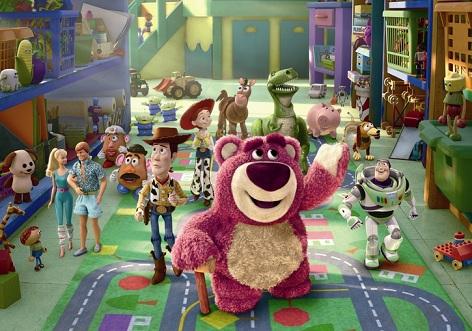 
Mine were Shark, Big Penguin, Small Penguin, Whale and Fox. I can trace Big Penguin to the attic where he eyeless sits and waits for the next clearout; Small Penguin was punted over the garden fence in the mid ‘90s; Shark is in a motel in France (or at least that’s where he was left – who knows what happened to him after we drove off?); and Whale and Fox I think vanished one term-time, probably in 2002 when I came back from university to find a whole lot of forced donating had taken place between my room and the charity shops in town. Toy Story 3 has sent me back looking for them and all the affection I dipped them in.

Toys that survive the guillotine of adolescence usually get preserved as unplayed-with relics, like the fate of my blind Big Penguin. This encroachment of loss and growth on childhood is what terrifies the toys of Toy Story 3 – Buzz, Woody, the Potato Heads, Slinky Dog and the others – as Andy starts his packing for college. Toys are selected for donation, the attic or trash – the question being whether the seeming-utopia of daycare, with hundreds of children to play with them, is a better choice than loyalty to a boy who doesn’t seem to want them anymore. It’s odd to think that most of the audience weren’t born when the first Toy Story came out 15 years ago – the anachronistic short animation that preceded the film, with its preaching of tolerance and diversity, brought home how fast cartoons have changed in so short a time – and to them ‘leaving to college’ must be shorthand for a land far, far away. For the parents in the audience, watching Andy’s mum look around his room and take a breath at how bare it looks stripped of his childhood stuff, it could only be one of those wordless moments when you realise that the child at your side is shooting off at a trajectory you will have little control over.

But it wouldn’t be a Toy Story if it wasn’t laced with the skill and humour that have defined the brand since 1995 (the same year that Yahoo! begun and Calvin and Hobbes ended). Ken (of Barbie and Ken fame) is the best new addition, a dapper 70s coward whose icky romance with Barbie centres more nostalgia for the parents. Incidentally, I can reveal after ‘extensive research’ that the Ken used in this film is modelled on Animal Lovin’ Ken, who came with his own free chimpanzee. Buzz’s Hispanic transformation was also widely appreciated, but it’s the density of jokes, tics and one-liners that the original Toy Story made the norm that once again succeeds.

We watched the film in 3D, which felt slightly pointless here: save for a few shots of flying and some neat perspectives, it didn’t really add much to the film. It feels like the current wave of 3D films are still trailing after Avatar and haven’t yet worked out what to do with the extra technology (except charge more for the ticket). I saw a 3D version of Hitchcock’s The Birds years ago, with the red and green lenses perched on my spectacles, and at one point in the cinema they blew air against the back of the audience’s legs and a thin mist sprayed from the ceiling. Back then this felt like the most incredible thing (despite my Dad explaining that if you walked outside you get realistic 3D rain and wind for free) and I suppose it’s in the nature of new inventions that they lose their novelty for kids before they do for anyone else; still, I hope that children growing up now don’t become too inured to the wonder of films. Toy Story 3 doesn’t need any adornment to make it better – the strength of the story had the previously animation-cynical lawyer next to me crying behind her 3D glasses – and if this is the last of the franchise then it’s a fine end.