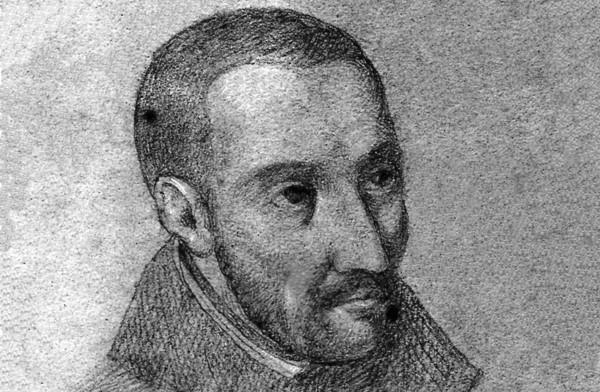 A Jesuit priest, poet and martyr whose influence on English literature does not get the recognition it deserves, Robert Southwell SJ was a devoted friend to many in his own time, and extends that hand of friendship across the centuries through his writing, says Luke Taylor SJ.

My first contact with Robert Southwell was through the strangely powerful poem every student of English literature reads – ‘The Burning Babe.’ Anthologised as a forerunner of the metaphysical style, the poem is more surreal and mystical than such categories suggest. Who is this Christ child, whose disturbing suffering lies under the veil of ordinary reality? And who is this poet, alone at the stroke of midnight on Christmas Eve?

Robert Southwell was born a nobleman, became a Jesuit and pastor, and died a saint and martyr at Tyburn on 21 February 1595. Despite atrocious torture over three years at the hands of the chief pursuivant Topcliffe, Southwell was never implicated in any plot against Her Majesty Queen Elizabeth I. Hanged, drawn and quartered as a traitor, his only crime was that of being a Catholic priest, who for six years had risked his own life in order to minister consolation and the sacraments to England’s beleaguered Catholics.

The more I read of the tangle of religion and politics in early modernity, the less I like triumphalist versions of either Protestant or Catholic hagiography. If the Protestant narrative conveniently excises the Catholic martyrs under Henry and Elizabeth, the Catholic hagiography is equally absent-minded about the Protestant martyrs under Mary. Elizabeth’s persecution of recusants was indeed shudderingly cruel, and yet the plots against her life, and the threat of foreign invasion, were undeniably real.

The clear light of an authentic holiness like that of Southwell cuts through the dark fog of those times. At his trial, Southwell admitted to being ‘near about the age of our Saviour.’ The comparison outraged Topcliffe, yet the implied analogy holds. Southwell was like Christ condemned under a sham trial, like Christ forgiving his persecutors, like Christ judged guilty by the state, like Christ bearing witness to a higher kingdom. His life cries out the truth hidden by the politically expedient compromise of the Elizabethan settlement.

Southwell’s saintly heroism touches me because it is so thoroughly human, incarnate, felt. The theme of his life and works is very clear – love. Yet that love matured only slowly into a perfected paradox: a boy priest who could not be broken by torture, an emotional poet marked by what Geoffrey Hill calls ‘absolute reasonableness.’

Southwell was a surprisingly beautiful baby, like the child in his poem. His family had profited from the dissolution of the monasteries. In his overseas education at Douai, he showed proof of a precocious intellect. The world, in short, lay at his feet. Yet his education brought him into contact with the Jesuits, then the most avant-garde spiritual and intellectual force in Europe, and Southwell felt certain that his destiny lay in an uncertain future with these men.

He was bitterly disappointed when initially refused entry. Accepted on a later application into the novitiate in Rome, he multiplied motivations for abnegation of self, self-flagellations rescued from mere mawkishness or conventionality by Southwell’s overwhelming sense of an ultimately valuable personal love: ‘God is my gift, Himself He freely gave me,’ he writes in ‘The Nativity of Christ’. ‘God’s gift am I, and none but Christ shall have me.’

The authenticity of that mutual love spilled out upon others. Southwell was devoted to Mary, of whose sodality (the ancestor of today’s Christian Life Communities) he was prefect, and to whom he wrote a series of poems composing an unconventional rosary. Southwell was also, as Philip Caraman has noted, uniquely gifted in giving and receiving intimate friendship with Jesuit companions. He felt bound to John Deckers at Douai, and to Henry Garnet, his fellow missionary to England, who referred to Southwell as ‘my companion, my dearest father and my helper.’ Friendship, too, was the basis of Southwell’s apostolate with lay people. He wrote long letters to Philip Howard, Earl of Arundel, imprisoned in the tower for his faith, and was chaplain and confidante to the earl’s wife, Anne.

Southwell writes to this circle of friends in prose marked with measured self-possession, the literary echo of his outstanding fortitude, his refusal to give way to fear. He urges the earl to resolution in An Epistle of Comfort (1587), implores his own father to return to the old faith in An Epistle of Robert Southwell unto his Father (1589), comforts the earl on the loss of his half-sister in The Triumphs over Death (1591), and counsels the countess in A Short Rule of Good Life (1592). Finally he defends Catholic priests and Jesuits against a defamatory proclamation in An Humble Supplication to Her Majesty (1591).

In these works, we hear Southwell as pastor. He writes in the long tradition of Christian epistle running from Saint Paul, pens a fresh exposition of apologetic defence as old as Justin Martyr’s epistle to the emperor. His prose was widely read, first in manuscript, then in print, not only by Catholics, but also (suitably expurgated) by Protestants. It is in the poetry and more imaginative prose, however, that we catch oblique glimpses of a more private and interior Southwell.

During my doctorate on Renaissance literature, I was lucky enough to study under the late, great Professor Barbara Lewalski. We debated the relative influence of Ignatian meditation and Calvinist introspection in the lyrics of John Donne and George Herbert. What is now becoming clearer is that not only Donne and Herbert but also Shakespeare pay silent tribute to the excised and marginalised work of Southwell. Sooner or later we will acknowledge Southwell not as a lone star but as one of the creative fathers of English Renaissance literature.

Thanks to the good work of Professor Peter Davidson, Southwell’s general editor with Oxford University Press, we shall have scholarly access to all of Southwell’s works. Thinking Faith readers may enjoy Southwell’s translation of Italian baroque in Saint Peter’s Complaint, and his very Ignatian reworking of a medieval homily in Mary Magdalen’s Funeral Tears. These works certainly qualify Southwell as a pre-eminent poet of Holy Saturday, desiring with Mary to die with Christ, lamenting with Peter his betrayals of Christ. Yet, as in ‘The Burning Babe’ Southwell’s Christmas Eve is on the verge of Christmas morn, so here too Southwell’s dark night is tinged with the first light of Easter.

Luke Taylor SJ is a Jesuit of the British Province, currently on regency at Wimbledon College.

Southwell the Poet: In and out of context