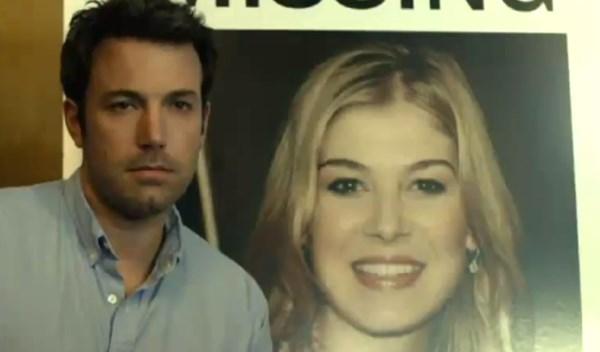 Few novels have captured more of the popular imagination in recent years than Gillian Flynn’s Gone Girl. A New York Times bestseller, its success led to comparisons with, at opposite ends of the literary spectrum, Fifty Shades of Grey and Hilary Mantel’s Bring Up the Bodies. The two million sales that it recorded within a year of its 2012 publication will no doubt have increased in recent weeks in anticipation of, and reaction to, the film adaptation, scripted by Flynn and directed by David Fincher.

The girl of the title is Amy Elliott-Dunne, whose husband arrives home on their fifth wedding anniversary to find her missing from a house in which a disturbance has clearly taken place. As in the novel, the subsequent investigations – by the police in the present day and by the audience who are presented with a series of flashbacks, courtesy of Amy’s diary – narrate a history of Nick and Amy’s troubled marriage, which leads inevitably to fingers of accusation being pointed at Nick.  It is halfway through the story that the ‘big reveal’ takes place and the gasps of my fellow cinema-goers suggested this is conveyed as effectively on screen as it is in print.

Despite tweaks to the story, the high and low points of the film are fairly consistent with those of the novel, in terms of quality and energy.  The two and half hours do not quite fly by, but there is plenty to engage an audience for that length of time; and on the occasions when momentum does start to drop, a fresh injection of pace is just around the corner.  Gone Girl is a film that fully deserves to be labelled a ‘thriller’.

Ben Affleck’s Nick needed to be sufficiently ambiguous in order for the question of whether he is a victim or a villain to be viable and drive at least some of the plot. For much of the film, he comes across as impassive rather than mysterious, but when Nick has to deliver the performance of his life for a TV interview, Affleck also ups his game. Rosamund Pike, on the other hand, is magnificent throughout. Anything less than an utterly believable Amy would have ruined the film irretrievably, but Pike delivers every facet of the role with conviction.  It’s hard to say more without including spoilers, but Amy’s analysis of and behaviour in her marriage require a mix of nuance and guile that cannot have been easy to achieve.

The paradox at the heart of the story is that the girl was gone long before the morning on which she goes missing.  It is only through the events that unfold from her disappearance that Nick gets to know his wife – his understanding of her becomes ever sharper as the mystery deepens. The uncertainty principle in quantum mechanics, which dictates that it is impossible to know the position and the behaviour of a particle, seems to be in operation here: the firmer a grasp that Nick has on one of those properties of Amy, the more he loses track of the other.  Explore that principle of physics further, and you find questions about whether particles are inherently ineffable; or whether we are just unable to measure the two things simultaneously and can only fix one property at a time. The latter interpretation is what theologian John Polkinghorne calls an ‘observer-influenced reality’, and this film seems to speak in favour of that. Nick’s attempts to take charge of the situation certainly alter the course of things, but he is never in possession of the clarity or control he seeks.

The story is very much of its time, in that it takes place in a smartphone- and cable TV-governed society.  The opinion-making TV personalities have the power to make or break the investigation – they are far from passive observers and their manipulation of public opinion has as much influence on reality as do Nick or Amy. Lest we think that this is the stuff of fiction, the trial of Oscar Pistorius, who will be sentenced in the coming days, has raised important questions about the effect of media coverage on the justice system (discussed here by Russell Pollitt SJ). There is a real danger that taking the law into one’s own hands is becoming a collective pursuit, as is highlighted by both truth and fiction. Gone are the days in which reality could be anything other than ‘observer-influenced’.