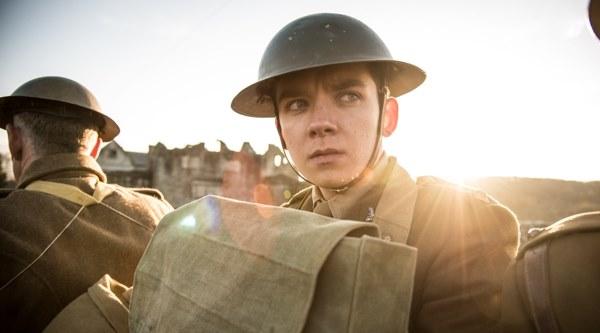 My grandfather fought in the trenches in the First World War. Like many men of his generation, he would never talk about it afterwards. It was the poets and the playwrights in the years after the war who took up the challenge of helping those who hadn’t fought to get some sense, at least, of what it had been like to be there. One of the most successful of such evocations was a play, Journey’s End, that had an initial two-year run in London from 1928 and was first filmed in 1930. Since then there have been four more film adaptations and countless revivals for theatre, professional and amateur. The first question facing any reviewer, then, is ‘Do we need another Journey’s End?’

The answer here is an emphatic ‘Yes!’ The screenwriter has given one reason. We live at a time when the sole world super-power is tempted to turn its back on the United Nations, which (as the League of Nations) was an international response to the blood-letting of the First World War; at a time when Britain is withdrawing from the European Union, an organisation rooted in a desire to escape from the grievances that led to the Second World War. Now, more than ever, he argues, we need to remember what Wilfrid Owen called ‘the pity of war’. More immediately, in the week when I saw this film, a group campaigning against nuclear weapons were awarded the Nobel Peace Prize, while President Trump was making bellicose threats simultaneously against North Korea and Iran. The inscription on so many war memorials, ‘Lest We Forget’, has rarely seemed more prophetic.

The film itself inevitably presents a somewhat familiar story. Many will have seen one or other of its former productions, and even if not, it treads a well-beaten path. A fresh-faced young recruit, Harry Raleigh (Asa Butterfield), travels out to the Western Front and almost immediately finds himself installed as an officer in a front-line trench. It is the last year of the war, and after a prolonged stalemate a German offensive is expected imminently. The film follows the small group of men in that one guarded position over the following four days and nights.

Often the film adaption of a stage play will attempt to open out the story, moving to other locations and presenting wider horizons that are difficult to portray in the theatre. Here the director, Saul Dibb, has chosen instead to make a virtue of the claustrophobia of trench life. Apart from a couple of trips back to the military HQ, set in a ruined chateau behind the lines, and two brief but significant aerial shots, neither we nor the men we are watching ever leave the sodden dugouts or hazardous walkways that they are ordered to defend. Their lives are made up of long periods of waiting, interspersed with sudden frenzied bouts of action, and both are well represented here.

Much of the focus is on the personalities of the soldiers portrayed. There is a danger here of encountering stock characters – the gruff yet kindly second-in-command, the cheery cook, the hypochondriac shirker and the token working-class officer – and it’s a danger that the film doesn’t entirely avoid. To be fair, it was the play upon which it was based that helped first to establish these types. Yet a series of excellent performances serve to fill out their reactions to the extremes of pressure under which the individuals labour. It is entirely believable that Captain Stanhope (Sam Claflin), who manages to finish off six bottles of whisky almost single-handedly in the course of the play’s four days, is nevertheless able to rally his troops at key moments and be thought of as the best of commanders. And the scene in which ‘Uncle’ Osborne (Paul Bettany) slowly sets aside all his few possessions as he prepares to go on a hazardous daylight raid is as moving as anything in the resulting carnage.

The German attack at the heart of the play was a historical event, the ‘Spring Offensive’ of 1918, by which the Germans gained a little ground at the cost of hundreds of thousands of lives, only to relinquish it again, with losses on a similar scale, a few months later. Journey’s End doesn’t grapple directly with the big questions of the point of the war, or the motivations of those directing it. It draws our attention, instead, to a flawed group of human beings caught up in events beyond their control, and invites us to identify with their fears but also with the taken-for-granted heroism of their mutual support. It is difficult to watch the film without wondering how you yourself might react under similar pressure, and leaving relieved that you haven’t in this way been ‘put to the test’. Remembering century-old events in this way can surely lead to a deeper commitment to ensuring that contemporary wall-building and sabre-rattling are not allowed to lead us down similar paths.