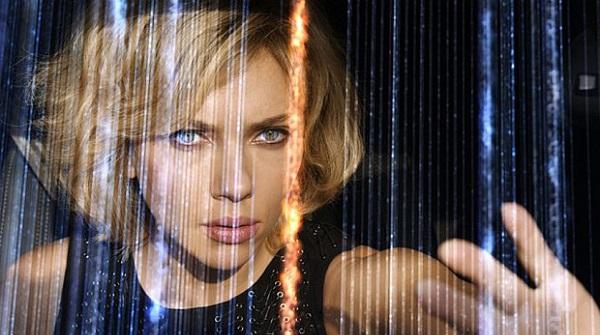 With fast enough acceleration, an object will disappear.  First you will see a car, then a blur and finally, at the end of the philosophical spectrum, nothing.  The car is detectable nowhere because it is everywhere at once.

So this film suggests and, on the surface anyway, it is an interesting idea.  It is a kind of pop application of Einsteinian theory, and not a million miles away from how Poul Anderson applies it in his excellent little novel, Tau Zero.  (If the film conveniently ignores the corollary that the car would also have to expand in size to encompass the entire universe, hey, the focus is not really on cars anyway.  It is on Scarlett Johansson’s brain power.)

She is Lucy, a party girl in Asia who is not up to anything very obvious aside from sporting tight animal prints and associating with the wrong sorts of characters – the sort who are all laughs under the strobe lights, but when it comes to real life they end up handcuffing you to a suitcase so that you will make a drop off to their angry drug lord.

So when Lucy gets sliced open and packed full of experimental contraband, which later begins to leak from its casings, we are pretty much ready for it.  What does come as a bit of a surprise, though, is when the drug starts to transform her into a gravity-defying super-genius.  Under its influence, her thoughts are racing faster and faster until, we are told, poof! They will just disappear… eventually.  So it is curious that the vacant stares show up so early.

This is not what we have been led to expect by the cutaway to a speculative physiologist lecturing in Paris (Morgan Freeman).  His tenderly-paced discourse has already explained what will happen if a human being ever gains access to more than 15 percent of her brain.  At 20 percent, she would control her own heartbeat; at 30, other people. At 40, matter; 50, the forces of nature; and who knows what else beyond.  It is unimaginable.  Expect at this point to be overwhelmed by a feeling of profundity; if it causes you to fall behind, don’t worry, there will be plenty of additional signposts along the way.

This film is not all so cerebral, though.  24 hours in the life of super-intelligent Lucy are filled with lots of car crashes, and gun battles with Taiwanese mafia drones who somehow clear Parisian customs with enough firepower to gun down half the police force.  This all to say, there is more going on than just philosophy.

But some brand of philosophy does seem to be the point… or at least the intended point.  In the final two or three minutes – the stretch of the film that is genuinely interesting – we are privy to Lucy’s epiphanic brainwave: a series of images which chronicle backward to the creation of the universe.  It is visually beautiful.  The effect is nearly spoiled, however, when the concluding voiceover commissions us, now that we know what life is all about, to go out and do likewise.  What?  Did I miss something between the picture of the hunting cheetah and the collapsing nebula?  Perhaps, more probably, what was missing was the influence of a little bit of that blue crystal stuff Lucy had been taking.

For all its not-quite-accomplished mind-blowing, though, the film did prompt one new thought.  If it is possible, thinking about things physical, to imagine something so fast that it arrives everywhere at once, could this suggest a way of thinking about things spiritual?  There is a school of thought that says that human beings are not souls within bodies, but bodies within souls; how about the idea of a soul as not so much something huge and static, but as lightning fast and speeding around like a cosmic pinball? I could still be rooted here, in my body, while my soul is dashing off and making contact with every other thing in the cosmos in electron cloud communion.

This is the best thing I could take away from the movie, anyway.  No narcotics required.