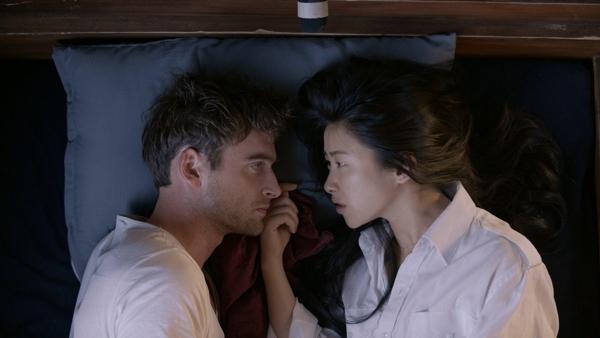 In 1910 Joseph Conrad published his short story, The Secret Sharer, in which a young and inexperienced English sea captain, on his first voyage in the Gulf of Siam, struggles to assert his authority over a semi-mutinous English crew.  Volunteering for watch one night, the captain is alone when a naked man climbs on board out of the surf and asks for asylum. The captain takes the stowaway – another Englishman – secretly to his cabin, dresses him in his clothes, and shares with him his rations and his narrow bed (Conrad is more interested in the claustrophobia of this close confinement than any homoeroticism).  As their relationship develops, the stowaway gives the captain invaluable advice on how to manage his crew before swimming away again naked, exiting as mysteriously as he arrived.

In that story there is a strong suggestion that the stowaway is a doppelgänger of the captain, what we might today describe as a psychological archetype rather than a physically real person.  Where the captain is weak and indecisive, the stowaway is strong and confident. With the doppelgänger’s guidance, the young captain masters his mutinous crew and becomes a more integrated personality.

This new film adaptation, written and directed by Peter Fudakowski (who produced the South African film Tsotsi in 2005), alters Conrad’s story drastically by making the naked stowaway a beautiful, young, Chinese woman. This simple change, made no doubt for entirely commercial reasons, effectively jettisons the psychological and mythic layers in Conrad’s story.  What we are left with is a romantic melodrama, and a frustratingly static one at that.

The film starts well enough.  Our young captain (played by Jack Laskey), who with a nod to the literary source is now a Pole called Konrad, is commissioned by an unscrupulous Chinese shipping boss in Shanghai to skipper an old rust-bucket of a cargo ship.  Konrad is ferried out to the floating crate only to receive a very insolent welcome from its surly Chinese crew. Before long, however, these would-be cut-throats turn out to be just a bunch of lazy, and even amiable, drunks, with some loss to the story in terms of suspense and tension.

After the nocturnal appearance from the surf of the naked stowaway Li (played by Zhu Zhu; she is filmed very coyly to ensure that 12A certificate), whom Konrad hides in the wardrobe of his cabin, the film tries to create some suspense by suggesting that she might be discovered by a cleaner. All very predictable, I found myself thinking, but what if she was discovered?  We have already been shown that the drunken and lax crew happily tolerates a prostitute on board: why should these men do anything other than shrug if they discovered Li?

The casting of the main characters is unconvincing.  Li is meant to be the wife of a rival captain, and an experienced navigator and old sea-dog herself, but Zhu Zhu plays this part as a coquettish starlet.  And has she found a sewing machine in the back of Konrad’s wardrobe?  If those are the captain’s clothes she is wearing, they seem to have been conveniently taken in to fit her shape.Polish Konrad, who looks and acts like a self-conscious young Englishman in the Brideshead mould, is something of a multicultural mess.  Hating his father’s Communism and Polish culture, Konrad tells Li that he only ever listens to Cuban music; yet when he unpacks his large concertina, he seems only to know Polish songs.  If he is so vehement in rejecting Daddy’s music and culture, why shlep this heavy instrument to the other side of the globe?

The Chinese crew is well cast, though, with the various characters clearly delineated.  In general the captain/crew subplot works well and builds to a satisfactory physical climax.  If only that could be said for the central romance. None of the scenes between Konrad and Li seem to go anywhere; a scene of flirtatious pillow talk, for example, is just embarrassing.   Did Fudakowski feel too constrained by his literary source to allow the romance to develop?

Fudakowski’s direction often feels clunky, but this is probably more a problem with the script.  What opportunities there are in the plot for surprises and reversals are lost.  The crew suspect that their ‘white devil’ captain has been employed to scuttle the ship as an insurance scam, whereas . . . they are totally correct.  And near the end, when the ship’s owner finds himself outmanoeuvred by a united captain and crew, and we expect the owner’s bodyguards to spring some sort of ambush, all that happens is that the boss weakly accepts his fate.  The film inevitably slumps with this pat resolution.

Where the film does excel, though, is in its production values and sense of place. The rust-bucket of a ship is totally convincing and the glittering sunlit oceans captured by cinematographer Michal Tywoniuk are beautiful (though an animated typhoon effect near the end of the film is less impressive).

In short, Secret Sharer is an opportunity wasted.  Audience members familiar with the Joseph Conrad story will be bewildered while other viewers will probably feel frustrated by the static central relationship. My advice to the latter: read the Conrad short story, and track down the Fudakowski-produced Tsotsi, which deservedly won the Oscar for Best Foreign Language Film in 2006.