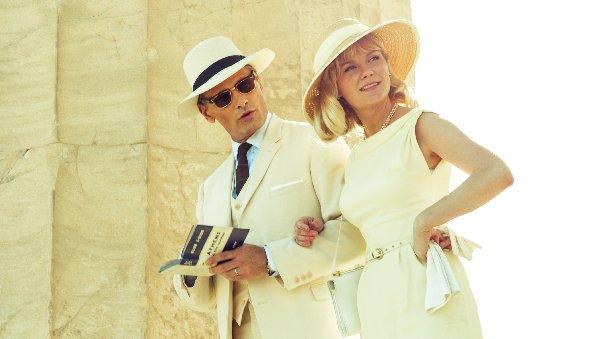 An attractive couple in spotless white linens laugh on the steps of the Parthenon.  We watch them as if over the shoulder of tour guide Rydal (Oscar Isaac), ever so unctuous, who is explaining to a cluster of all-female college students that the building derives its name from the Greek for ‘virgins’.  A little later, the same guide sees the same couple at a table in the cafe where he is schmoozing one of the young ladies.  Is this an accident?  Mere coincidence?  Anything more?

The well-heeled wife, Colette MacFarland (Kirsten Dunst), has her doubts and seeks to allay them by enlisting his services for a private tour through a local bazaar.  There her husband, Chester (Viggo Mortenson), buys her a bracelet.  Rydal does the negotiating and shortchanges them: apparently he is something of a crook.

They all dine.  The wife forgets her bracelet and Rydal dutifully carries it back to the couple’s lavish hotel, but not before Chester tussles with a revolver-wielding private investigator who has been tracking the couple across Europe suspecting them of investment fraud.  Chester, apparently, is something of a bigger crook.

But at least he is not a murderer.  He wasn’t, anyway, until the detective slipped and hit his head a little too hard.  Rydal turns the corner just in time to see Chester disposing of the evidence.  Is this all accident?  Coincidence?  Anything more?

If there is a big decision to be made, this is the moment.  Precisely why Rydal elects to stick around and prolong this problematic association is anyone’s guess, but he does, and the Mediterranean tour continues, if at a somewhat less leisurely pace.

Yet still not fast enough to keep our hearts pounding.  After dashing off a bus to avoid identification, tromping through the ruins of Knossos at midday and scrambling by night through the dingy streets of Istanbul, it is still not clear why we should really be bothering about these criminals or investing much interest in their laboured breath.

The flaw here seems to be structural.  No one in the trio has really made any character-defining decisions -- sacrificing something they want for something they deem more important -- and so there is little recognisable humanity on display to arouse our sympathy.  The drama’s most conspicuous display, rather, is a lack of character.  Can it really be true, for instance, that Rydal forsakes his petty thievery to aid and abet these strangers merely for a cut of Chester’s steal or the off-chance of sleeping with his wife?  If so, who particularly cares if he succeeds or fails?

Maybe the lesson is this: dire circumstances do not perforce make heroes, and a running scoundrel just drags his stink along.  It is even worse if it is all only inspired by an accident.  But maybe this is the point: everything is an accident; it is all coincidence; there isn’t anything more?

If so, then something additional must be said, and sadly at the level of a complaint.  Accidents are not especially interesting.  Perhaps this is because they are, by definition, disappointments of intelligibility: whereas decisions can be pondered and plumbed, investigated and analysed for something significant about the character of the person behind them, accidents just happen.  It is the central flaw of this film that every important event ‘just happens’.  It therefore demonstrates the reciprocal relationship between characters making choices and incidents arousing interest; unfortunately, it does so by failing to accomplish either.

Perhaps all of this is probing the film beyond its depth and trying too hard to discern a substance to this show, a face under its mask, something truly human beneath the casual pageantry of deceit, caprice and shallow self-interest.  What a pity if, indeed, the only meaning of The Two Faces of January is, in the end, a mundane and dingy duplicity.