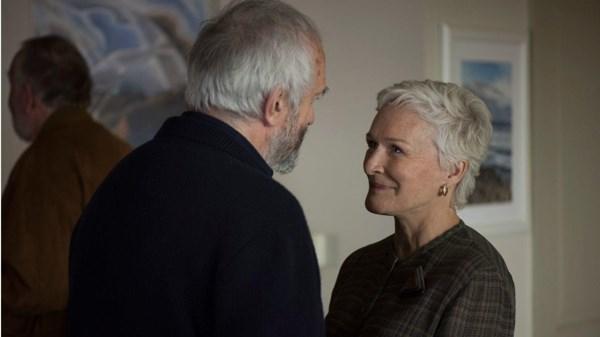 ‘A writer must be read,’ Elizabeth McGovern observes during her cameo in The Wife, illustrating one of the film’s central insights: in order to have a voice, it is not enough simply to speak; one must be heard.

This is the tension at the heart of Joe and Joan Castleman’s marriage (brought to life magnificently by Jonathan Pryce and Glenn Close). Joe, a famous novelist, is informed at the beginning of the film that he will be receiving the Nobel Prize for Literature. The ensuing celebration, where friends and family come together to revel in Joe’s crowning triumph, is the first sign that all is not well in the Castleman family; here are the first intimations of Joe’s vanity, the uneasy wrinkles between him and his son, David (Max Irons), and the vague discomfort of reducing Joan to the clichéd role of ‘the wife,’ as she struggles to be heard over her eminent husband. Over the next hour-and-a-half, all these disquietudes are developed and explored as the family travels to Stockholm for the Nobel ceremony – also accompanied by the unwelcome would-be biographer of Joe, Nathaniel Bone (Christian Slater). Bone’s presence acts as the catalyst for conflict in the picture, as he attempts to unearth any skeletons in the Castlemans’ closet.

The relationship at the heart of the film is portrayed remarkably. This is no sketch of a forty-year marriage, but a three-dimensional realisation of a life spent together. The greatest proof of this is found in the way that dysfunction and love coexist in their relationship; the frequent moments of conflict and disparity only make their union more realistic, more believable. Naturally, Jane Anderson’s script and Meg Wolitzer’s novel play a significant role in realising this relationship so truthfully, but it is the extraordinary performances of Close and Pryce that make it feel so very honest.

These might be career-best performances – no mean feat for two masters with such impressive bodies of work. Their chemistry is phenomenal, as if they’ve been working together for the entire forty years their characters have been married, and they bring to life one of the most complex relationships seen in mainstream cinema for many years. The dark side of this relationship is unavoidable; there is neglect, even cruelty at times, but amidst all this there is an undeniable and powerful bond between them. One scene exemplifies this perfectly, when a bitter argument that reinvigorates traumas from their past dissolves entirely into joy at the sudden news of their grandchild’s birth. Because of moments like this, which hold conflict and love so close to each other, the question that runs throughout the film is never simply, ‘what will love endure?’, but ‘why does love endure so much?’

A significant reason why the portrayal of this relationship is so perceptive is the way in which it observes the effect of aging on the couple. Through the use of flashback and narrative allusion, the viewer is afforded brief windows into Joe and Joan’s history, each time revealing something more in the wider recesses of their shared life together. As the film develops, shadows are slowly lifted from the canvas of their relationship, and the more the viewer sees, the more we wonder what has been lost between them as they have aged.

There are two particularly memorable, parallel scenes that demonstrate this: the first comes right at the beginning of the film, when Joan and Joe jump up and down on their bed together like children, celebrating the news of the Nobel; later, in a flashback, we see that they had celebrated Joe’s first published novel similarly, jumping on their bed in their youth in similar fashion. Director Björn Runge takes care to ensure these scenes correspond; he uses the same low angle, the same jump-cut edit in and out. The dialogue, however, is pointedly different: in the first scene, Joe exclaims, ‘I’ve won the Nobel! I’ve won the Nobel!’ and it is only in the later scene that the viewer realises the pain tied to this, since Joe and Joan celebrated his first novel by exclaiming together, ‘We’re getting published! We’re getting published!’ Somewhere along the decades, ‘we’ was reduced to ‘I’, and this is as concise a summary of the story’s tragedy as is found anywhere in the film.

This trajectory is embodied in the movie’s narrative, and it is deeply connected to its most overt theme: the marginalisation of Joan and her voice. Along these lines, there isn’t so much a twist in the plot as an elephant in the room. In all likelihood, most audiences will gather where the story is headed from the trailer, yet this is certainly not a shortcoming, since the film seems to intend as much. Because of this, the film is able to draw its drama from far more interesting sources than plot, such as Joe and Joan’s multi-layered relationship, the love between them that at times seems almost unaccountable, or the insight that a writer’s voice is as much a construction of the reader as it is the product of their own prose.

The result is a film that grips the viewer because of its characters and its thematic content. The value of the picture lies in its exploration of the protagonists’ marriage and its insight into the themes of love and what it means to be truly heard and recognised in life. The visual artistry of the film is very limited, with Runge providing a basic coverage of every scene, rather than using the visual to empower the story. His work with the actors is remarkable, though, and it is this along with the extraordinary performances of Close and Pryce that makes The Wife worth seeing.

Learning to pray in front of the television