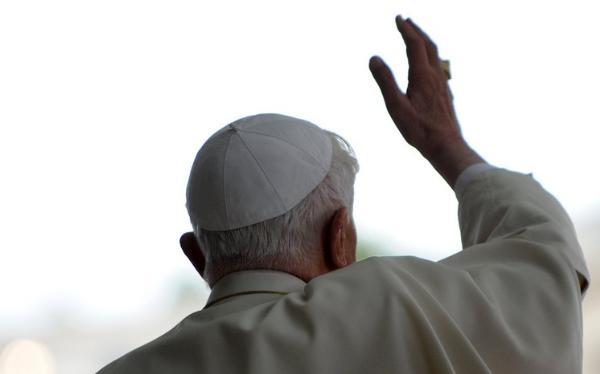 Christine Allen, Director of Catholic development organisation, Progressio, describes her meeting with Pope Benedict XVI during his formal welcome by the Queen at Holyroodhouse Palace in Edinburgh. In what context has the Pope placed his visit to the United Kingdom with his opening words?

It was a bright, sunny morning in Edinburgh and I thought I was still dreaming when I awoke to the sound of bagpipes. It wasn’t a dream: it was a pipe band practising further down Princes Street; they had an early start as it was 6.30am! The crash barriers had been erected and the ‘road closed’ signs put up in preparation for the St Ninian’s Day parade and the Papal entourage that would wind its way around the streets of Edinburgh when Pope Benedict XVI would leave the Palace of Holyroodhouse.

As Director of Progressio, a lay Catholic development charity, I had been invited to attend the formal welcoming of the Pope by Her Majesty the Queen at the Palace. I met up with a few friends from our sector (from CAFOD, SCIAF, and VSO) and took my place amongst politicians, church leaders and other dignitaries. There were some pretty impressive uniforms on display!

As a development organisation, Progressio’s hope for the Papal visit, especially as it takes place just a week before the UN Summit on the Millennium Development Goals, was that this week might be an opportunity to talk about the Church’s contribution – both in action and through its social teaching – to tackling poverty and climate change, and to promoting global solidarity and a sense of our interconnectedness. The media coverage has, I suppose understandably, focused on the controversies that surround the pontiff. One can never seek to defend the indefensible, and I believe that questions of power, abuse and equalities are areas that require a change in attitude. However, some recognition of how much effort the Catholic Bishops in the UK in particular have put into tackling abuse would be at least fair.

From my experience, the Church’s authenticity and real strength lies in its social teaching and in the witness and commitment of those people – priests, religious and lay – who are working together in local communities to make a significant difference to the lives of people who are poor and marginalised around the world. Whether it’s providing services in healthcare or education, participating in campaigns and social action to improve living conditions or protect the environment, or speaking out against human rights abuses, there exists the witness of the Church. To focus too much on the Pope can detract from that wider body of Christ that is the Church.

Interestingly enough, it was the Queen that made this point. In her welcome, she talked about the importance of the contribution of the Church in all of these areas – in tackling poverty and climate change, in supporting people, providing services, education and so on.

The Pope himself introduced his visit as an offer of ‘the hand of friendship’ – perhaps only too aware of the controversies that surround his visit. He talked about how the UK had been for many years ‘a force for good’ in the world for Christians and non-Christians alike. He made specific references to the UK’s role in the Second World War and the country’s opposition to the Nazi forces, and to the central role of the UK in setting up post-war institutions such as the UN, as examples of how the UK has been a force for global good. He also mentioned particularly the work for peace in Northern Ireland.

With regard to the international stage, he called on all countries to act wisely for the common good, and valued the UK contribution to this. He hoped that his visit was an opportunity to promote peace, authentic development and human rights. Whilst he noted that there was an increase in secularism, there was something of an appeal for us in the UK not to lose sight of the Christian foundations that are at the heart of the country’s laws, perspective and tolerance.

The Pope seemed frail and small. As someone who had difficulties with Cardinal Ratzinger’s hard-line approach, especially to liberation theology and the work of the Church on the ground, I found myself taken aback when I saw such a tiny man. His speech was conciliatory, and he surely still had the coverage of Cardinal Kasper’s comments ringing in his ears.

After the speeches, still gathered in my small group of Church-based international development colleagues, it became apparent that we would be presented to the Queen and the Pope. I thanked the Queen for her references to poverty, development and climate change in her speech. She smiled and said that there were lots of good things to choose from. In the fleeting moment with the Pope, all I could say was that I was ‘from Progressio – as in Populorum Progressio – and work on international development’ and I saw the infamous twinkly eyes.

It was a very cordial event and I saw no indication of demonstrations – but I did see a lot of police! Princes Street was filling up with crowds as I set off for the Palace, giving some kind of indication of the numbers that would greet the Pope as he set off for the next part of his journey. Walking back through Edinburgh even some time afterwards, I saw people with scarves and flags still milling around.

It’s the start of a whirlwind few days and it will be interesting to see in what direction the speeches will go and whether the controversies will rage. I head to Twickenham to participate in an inter-faith event in the morning – a sign that the Catholic Church sees itself not in a ghetto, but as part of a vibrant and active community of faiths. The message that will be conveyed is that the world is not a place to be afraid of, and that there is much we share with other faiths in our vision of a global common good.

The visit has been placed from its very beginning in the context of a commitment to the global common good. Following the recognition of this by the Queen and by the Pope, the challenge now is to turn this ‘hand of friendship’ from a phrase into something real in the life and ministry of the Church today, into our shared actions for a better world.

Christine Allen is Director of Progressio.

Pope Benedict’s speech to the Queen

The Queen’s speech of welcome to Pope Benedict

The renewal of theology as dialogue from within: part I