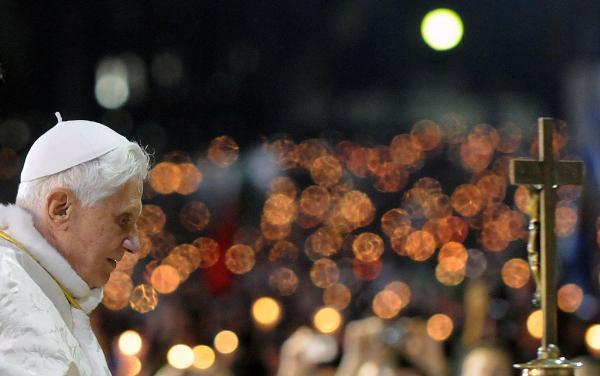 ‘Those twenty or so minutes in the presence of the Pope have created for me a lasting memory, part of a collective memory of this visit for many Catholics.’ Philip Harrison reflects on what it meant to him, as a Jesuit in formation, to be in the presence of Pope Benedict as he thanked the religious of the United Kingdom for their role in ‘imparting wisdom’ to the young people they teach.

Catholic education has undoubtedly been one of the greatest successes of the Church in Britain over the past 150 years. On Friday 17 September, Pope Benedict’s visit to St Mary's University College in Twickenham was an opportunity to recognise and celebrate this contribution to society on a day that saw two events with a focus on education: a prayer service with religious involved in education, and a meeting with 4000 children and young people from Catholic schools and colleges.

As a Jesuit in formation I had been invited to the first of these events in recognition of the long standing Jesuit commitment to education. However, the day started even earlier for me, at 5.40am outside my community in Wimbledon, waiting for a BBC car to pick me up. As well as being invited to the prayer with religious, I had also been asked to give a brief interview about the papal visit for Radio 5 Live. The car arrived on time and I was whisked to St Mary’s to go through the security checks in time for the interview.

I found my way to a green tent where the presenter of the show was waiting. As I arrived, the radio staff were thrown into disarray by a helicopter fluttering above which was interfering with the microphones. After this, police sniffer dogs bounded through the tent, and then after a quick introduction the interview got underway. The media coverage in the run up to the visit had been less than sympathetic to the Church; but a conversation that I had had with a media consultant for the Bishops’ Conference the previous day had suggested that things were turning out rather better than anticipated. Now that the Pope had arrived to a good reception in Edinburgh, the media had turned along with the nation to wait and see what would happen.

The interview went off without a hitch and I turned my thoughts to the Pope's arrival at St Mary's. Waiting outside the chapel with nineteen other Jesuits in formation, I found myself thinking about the last papal visit. Growing up in a parish in Bristol, I remember hearing the many stories of that visit, which took place in the year I was born, 1982. I couldn't have imagined back then that one day I would be attending a service presided over by the Pope as a Jesuit scholastic!

The prayer service began before the Pope arrived and included psalms, readings and music. The beautiful chapel of St Mary's, built in 1963, was a perfect setting for the service. The sun poured in through its stained glass as the choir sang a piece by Martin Forester and Liebster Jesu by J.S. Bach. After this time of prayer, three representatives of religious congregations involved in teaching addressed those assembled to meet the Pope. The last of these was the Jesuit Provincial, Fr Michael Holman, who encouraged all of us gathered there to recall the hugely positive impact of Catholic schools founded both at home and abroad with a concern especially for the poor and marginalised. He spoke about Christ at work in the world, the Christ who is our hope and who makes out of history something new. ‘Perhaps’, said Fr Holman, ‘we can see this Jesus most of all in our young people.’ It was a striking reminder that despite the many difficulties in the Church, young people are its future and the opportunities and respect we offer them really matter.

Suddenly, from outside the chapel, we heard the first shouts and cries welcoming the Pope. A great cheer rose up in anticipation of his arrival. The congregation began to sing a setting of the Latin words, Veni Sancte Spiritus (‘Come Holy Spirit’). The singing continued and grew into to a crescendo. As the Pope walked in, surrounded by bishops, monsignors and security guards, I was struck by the thought that he seemed so ordinary. Just a small man dressed in white. It was almost hard to see what the fuss was about! As soon as he began to speak, though, the significance of his presence began to sink in.

The Pope spoke eloquently and surprisingly about education, with the theme of education as wisdom, saying that education ‘is about forming the human person, equipping him or her to live life to the full – in short it is about imparting wisdom.’ He also credited St Columba, St Augustine and St Benedict as great teachers of the Church, making the connection between their work of missionary evangelisation and education. Perhaps most powerfully, he expressed a deep sentiment of gratitude to those present and to many others for their work with young people. He also fondly remembered his own education by the English Ladies (the Sisters of Mary Ward) to the delight of the assembled religious.

Those twenty or so minutes in the presence of the Pope have created for me a lasting memory, part of a collective memory of this visit for many Catholics. The significance of his visit surely goes beyond the words he has spoken over these few days. His visit is a gesture which reveals the Catholic Church today as a Church which is leaving behind the spirit of timidity that has marked the public expression of its values. In the Pope’s presence, I felt part of a Church with an important message about the deep value of young people which needs to be heard in our society. I hope that I will still be talking about it by the time the next papal visit comes round.

The Brothers and Sisters of the Pope